Feel Good Story of the Day....Hippie Dragged Out Of Rep. Turner Swearing In, OWS Squatter Camp Dismantled In NY 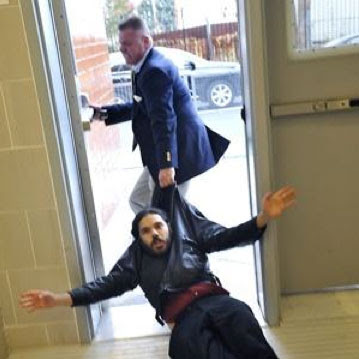 Kevin Hiltunen, a former NYPD officer, yesterday grabbed an Occupy Wall Street demonstrator by the collar and dragged him out of a Queens school where he’d been heckling US Rep. Bob Turner at the congressman’s swearing-in ceremony.

“I guess you could say I sorted him out,” said Hiltunen, 48, his jacket and tie barely mussed after dragging the scruffy protester out on his rear end.

“All I was doing was trying to stop this historic occasion from being disrupt-ed. There is a time and place to exercise your First Amendment rights,’’ said Hiltunen, of Bergen Beach, Brooklyn, who was identified by people at the ceremony as an ex-Marine.

“This was not the time or the venue,” Hiltunen added.

I don't recall any of these Occupy squatters ever protesting Democrats, do you? They've only been going after Republicans.

Speaking of which, New York's squatter camp was dismantled last night and this morning. The NY Post and Michelle Malkin have all the details.  The whole place needs to be disinfected, because God only knows what's gone on there.  Why?  Here's an example....Gateway Pundit has posted a video (click at own risk-gross factor) of one of the squatters doing "number two" publicly in Seattle.
Posted by MaroonedinMarin at 4:24 AM

Email ThisBlogThis!Share to TwitterShare to FacebookShare to Pinterest
Labels: occupywallst