It's bad enough that the Obama Regime has sealed the court records into Border Patrol Agent Brian Terry's killing with guns from Operation Fast & Furious.

Today, the temperature went up a few more degrees.

Eric Holder, the Regime's corrupt attorney general, lashed out today at The Daily Caller, who asked him about the growing number of congressmen who are calling for his resignation.

As Holder’s aide was escorting the attorney general offstage following his remarks Tuesday afternoon at the White House, a Daily Caller reporter introduced himself and shook Holder’s hand. The reporter asked him for a response to the growing chorus of federal legislators demanding his resignation.

Holder stepped towards the exit, then turned around, stepped back toward the reporter, and sternly said, “You guys need to — you need to stop this. It’s not an organic thing that’s just happening. You guys are behind it.” 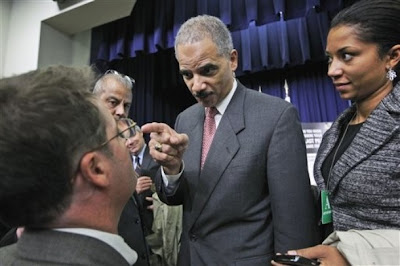 Holder then walked offstage without answering TheDC’s request for comment about calls for his resignation.

Not only that, ATF whistleblower have said they have been retaliated against by Holder's Department of InJustice, for calling attention to Fast & Furious (Nice Deb).

ATF whistleblowers told Fox News, this morning, that since testifying on Capitol Hill, it’s been all downhill for them. Meanwhile, the executives who oversaw Fast and Furious were either promoted or transferred. Only one person, US Atty in AZ, Dennis Burke has resigned:

In a letter to Attorney-General Eric Holder yesterday, Congressman Darrell Issa and Senator Charles Grassley asked for information on media leaks that were aimed at discrediting the testimony of a key ATF whistleblower–Agent John Dodson. The leak violates the Privacy Act which protects the personal information employers gather on employees, and points to more chicanery on the part of ATF management in retaliating against agents who went public with the agency’s illegal activity.


According to the letter, an employee of the DOJ was forced to resign due to the leak. Issa and Grassley are requesting information on that employee and if other employees had access to a shared computer drive that may have led to the leaked information.


In addition, Dodson allegedly has already been the recipient of retaliatory action earlier this year. Back in July St. Louis Gun Rights Examiner Kurt Hofmann provided evidence that Dodson was the victim of a smear campaign by his superiors.


And then there is this report submitted by this writer on October 25 indicating a widespread, orchestrated program of retaliation against whistleblowers implemented by ATF supervisors. One agent’s family was placed in lethal danger when his house was set on fire in the middle of the night while his wife and children slept inside. Supervisors had good reason to believe that Hell’s Angels had set the fire in response to the agent’s undercover work that resulted in several arrests. But ATF management never investigated the fire, nor did they do anything about numerous threats the agent received from Hell’s Angels.

And where all those libs who claimed the Bush Justice Department and then Attorney General Alberto Gonzales had become political and, as then Senator Obama said in 2007, needed to resign because of "lack of oversight."

Here is a situation where an American law enforcement agent was killed by guns the DOIJ put in their hands, and where is the oversight, Mister Obama? Eric Holder has turned the InJustice Department into a government agency that covers for the corruption of the Obama Regime and then bullies whistleblowers and states like Arizona, Alabama, South Carolina over enforcement of immigration laws.