For anyone who has followed the modern Left, it's been apparent that the ends justify the means, including spreading lies and slander about people who they politically disagree with, as well as a sympathetic media who act as PR agents of the Democrat Party, instead of "objective" watchdogs.

The lapdog media outlet CNN, their host Piers Morgan, as well as the husband of Rep. Gabrielle Giffords, astronaut Mark Kelly, acted on Thanksgiving Eve just like the proverbial Leftist zealot who is so blinded by their ideology they're willing to ruin the meaning of the holidays.

Kelly and Morgan used their time to continue the lapdog media lie that Sarah Palin somehow had something to do with Rep. Giffords shooting, as well as the killing of six wounding of 13 others (Newsbusters).

PIERS MORGAN, HOST: Some interesting insights in the book into who, you know, walked to the plate and who didn't, really, in terms of political colleagues and people that she had worked for and against. Sarah Palin doesn't come out of this very well, I don't think, because there was a woman who at the time had been putting these cross hair things on her website and stuff, including Gabby.

And in her haste to take responsibility didn't even bother to pick the phone up, to write, do anything.

MARK KELLY: Yeah, we were never contacted by her.

MORGAN: I find that extraordinary.

KELLY: Yeah, I was surprised too. You know, certainly the targets that she put over Gabby's and other people's districts, in our opinion, was not the right thing to do. She is not the first person to do that. And it hasn't always been Republicans that have done that.

(MIM Note - The Difference between Survey Symbols and "Targets" [Moonbattery])

MORGAN: I liked your line about it, which is if you had had the chance to talk to her, and you were expecting to, you weren't going to say that you were responsible. But you were going to say, you've been irresponsible.

KELLY: Yeah, that's my plan. You know, this was no surprise to us. Gabby even spoke about it before January 8th, during the election cycle, leading up to the election, in an interview. I think it might have been on MSNBC or some other -- another cable news network. She made is very clear that, hey, this is what's going on, and this could ultimately incite people to do violent things. So it wasn't a big surprise on January 8th that -- you know, that we -- you know, where we knew this map existed with the cross-hairs on it. Now, having said that, you know, Sarah Palin certainly is not responsible for what happened. But I think the angry rhetoric in an election year is not -- it's not helpful.

MORGAN: Because there are people out there who are clearly mentally unstable. And Jared Lee Loughner is a classic example of this, where he clearly was not normal when he did this.

You know Mark Kelly, you have one hell of a nerve to, on one hand, say Palin was "irresponsible" for the "targets" poster and then say she "certainly isn't responsible for what happened." What is it going to be, Captain Kelly? You can't have it both ways. What motivates you in making this untrue claim? Misdirected anger?  Future political ambitions?

As for Ms. Palin not contacting you, why should she? She made a public statement the afternoon of the shooting, and went further a few days later.  What good was that?  She was viciously attacked for standing up to the libel and false accusations being linked to her. The message? Sarah Palin is damned if she does and damned if she doesn't.

And spare me the talk of the "angry rhetoric in an election year" crap Captain Kelly, because that had nothing to do with this shooting. Especially when those making the same accusation and calling for more civility have accused the GOP of wanting women to die on the hospital floor, building a moat around the border with alligators, or wanting dirtier air or water. Instead of condemning the hateful rhetoric of Occupy Wall Street, they fundraise off of it or say they ran for office because of it.  Incivility is the hallmark of the Democrat Left, they shamelessly live off of it and accuse the GOP of inciting it.

Just like the "Tea Party called us the n-word" lie, the linking of Sarah Palin to this tragedy was a cynical and diabolical attempt to eliminate a movement or potential Presidential candidate with their poison pens and tongues that they could not defeat ideologically. It also proves the adage that, to the Left, the ends justifies the means, regardless if a few eggs have to be broken in order to make the omelet.

And shame on you, Captain Mark Kelly, for not only repeating the lie, but spiting the goodwill of millions of Americans who have wished the best for Rep. Giffords, and who have been cheered by her recovery.

Speaking of using the word "targets," this today from AP: 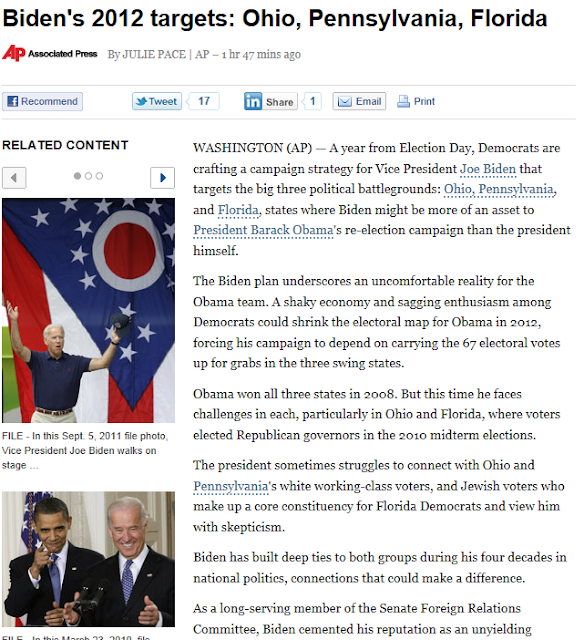 Posted by MaroonedinMarin at 11:03 AM