Yesterday, I had the feeling that Richard Milhous Obama's announced withdrawal of our troops from Iraq was purely political, timed for the 2012 election as a way of rallying his far-Left, anti-military, Code Pinko base.

This e-mail from Obama's campaign today proves it. 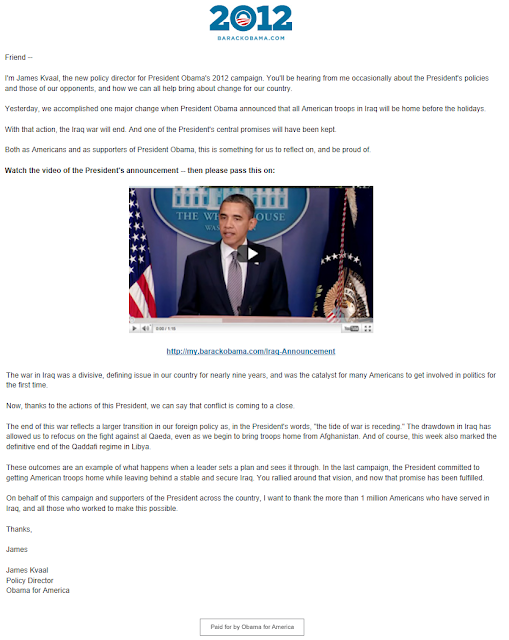 I'm James Kvaal, the new policy director for President Obama's 2012 campaign. You'll be hearing from me occasionally about the President's policies and those of our opponents, and how we can all help bring about change for our country.

Yesterday, we accomplished one major change when President Obama announced that all American troops in Iraq will be home before the holidays.

With that action, the Iraq war will end. And one of the President's central promises will have been kept.

Both as Americans and as supporters of President Obama, this is something for us to reflect on, and be proud of.

Watch the video of the President's announcement -- then please pass this on:

The war in Iraq was a divisive, defining issue in our country for nearly nine years, and was the catalyst for many Americans to get involved in politics for the first time.

Now, thanks to the actions of this President, we can say that conflict is coming to a close.

The end of this war reflects a larger transition in our foreign policy as, in the President's words, "the tide of war is receding." The drawdown in Iraq has allowed us to refocus on the fight against al Qaeda, even as we begin to bring troops home from Afghanistan. And of course, this week also marked the definitive end of the Qaddafi regime in Libya.

These outcomes are an example of what happens when a leader sets a plan and sees it through. In the last campaign, the President committed to getting American troops home while leaving behind a stable and secure Iraq. You rallied around that vision, and now that promise has been fulfilled.

On behalf of this campaign and supporters of the President across the country, I want to thank the more than 1 million Americans who have served in Iraq, and all those who worked to make this possible.

Notice that the word "victory" is missing. Because with Obama and the Democrats, the only victory they cared about was a political one, not one for the peace of the world and a better life for the Middle East. So no wonder this e-mail is all about Obama, and not the sacrifices our military have made, that Obama wants to use for political fodder.

Divisive? Yes it was. Who made it that way? People like Obama and the Democrats, who had a personal vendetta and hate for President Bush, and wanted to embarrass him politically, never mind what it meant to our troops, our national security, or combating terrorism. When it came to winning the war, via the surge in 2007, who opposed it? Obama and his Party of Treason. Just like Congressmen who attack and insult retired generals on border security, then send out fundraising e-mails saying the generals attacked them.

And you liberals, don't come here and tell me "Weeeeell, he got bin Laden!" No, those brave Navy Seals killed that bastard, not the golfer-in-chief.

Compare Obama vs. Bush...one is all about him, the other gives credit to our military.

Everything is looked at in a political prism for Obama, and what helps him is more important than what is best for our nation.
Posted by MaroonedinMarin at 5:23 PM