It may have been cold and snowy here in the 'burbs of Washington DC, but the insanity of the Obama Regime/Democrat Party approved #Occupy Wall Street movement was as hot as ever.

While on Twitter yesterday during the snow fall, I saw Sister Toldjah mentioning how things were getting hot in Denver...and sure enough they did. Gateway Pundit has video of how police in riot gear had to hold back the squatters there, as they tried to close down the camp. One policeman had his bike kicked over and others were kicked at.

The video below shows one of the squatters trying to knock over a police motorcycle (around 1:24) and got a faceful of dirt after the policeman chased and cuffed him.


You can hear sounds of protesters yelling at cops as well, one of the #OWS crowd at about 6:30 in the video calls someone (police?) a "f**king f@ggot."

It was a bit calmer in Orange County, CA this weekend, where about 100 people gathered in Irvine to show "solidarity." Donald Douglas of American Power was there had has a great photo essay and report, including some spelling challenged protest signs. Maybe they need to OccupyClassroom instead. Check out the sticker on this car that he got a photo of. 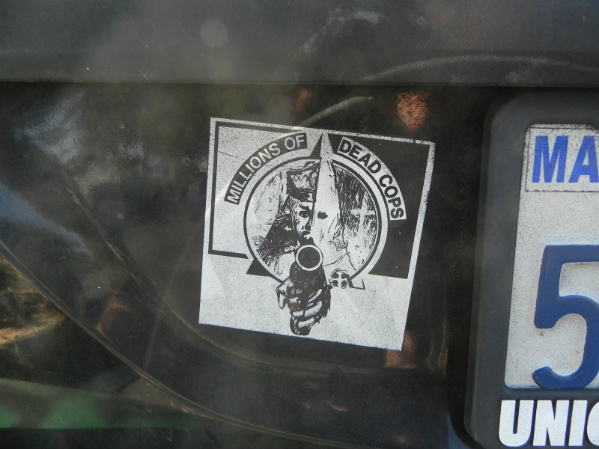 In Oregon this morning, 30 of the squatters were arrested after refusing to leave a park in an "affluent district (Fox News). In Chicago, they want the collapse of the US Government (Rebel Pundit, via Weasel Zippers).

More OWS stories can be found at Midnight Blue, where there is also a contest to vote for the funniest #OWS video as well.

I'm working on a roundup right now. Check out Verum Serum blog, where he has some big coverage from Occupy LA. And send me any additional coverage you might have. I want to do an essay or two comparing the differences nationwide.