Today, we learned a lot more about Iraq War vet and hero to the Occupy Whatever squatters, Scott Olsen.

One, he was a Marine and did serve two tours in Iraq, but he appears to have been a troublemaker.

Verum Serum had an exclusive today on Olsen, that he had started a website called "I Hate the Marine Corps, Do You?"

The Marine Corps thrives on its image. They convince young men and women that they’re joining a professional military organization. But that’s not the case at all, every Marine knows it, and most have no problem downplaying the bullshit to outsiders so they can protect their “beloved corps”. I noticed some of the other posters have told you not to pay any attention to my site because we’re just a bunch of ********* who couldn’t hack it, right? Maybe not hacking it means we saw through the bullshit and don’t want to take it. Maybe the brainwashing didn’t work on us. I’m not here to tell you if you should join or not. I’m here to advise you to take the people who visit my website just as seriously as anybody who tries to sell you the MC as a good thing.
My site is anonymous, these people don’t have to worry about hiding from the MC, or protecting the MC’s image or anything. It is unfiltered truth.
Source(s):
Former Marine, owner of http://www.ihatethemarinecorps.com

VS also links to what is said to be Olsen's Flickr account, where there are photos of marijuana plants, hookahs, keg parties. 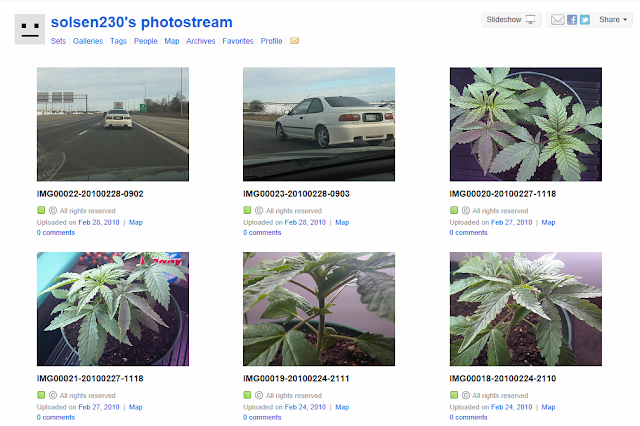 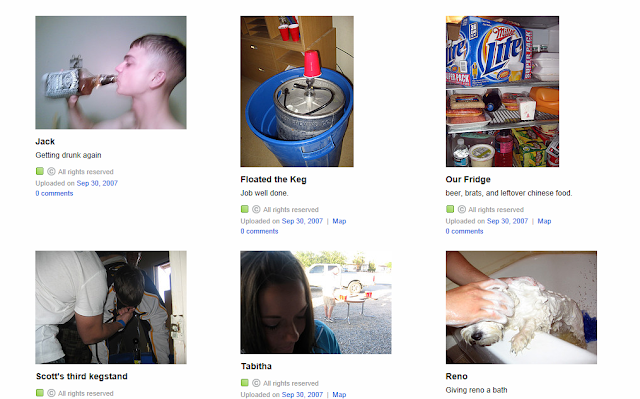 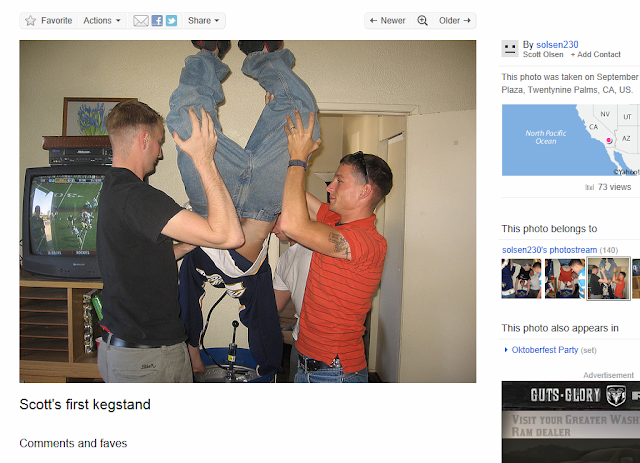 I was talking to my 1stsgt regarding a pending adsep since i had been accused of using cocaine. Anyway, when we were done talking, he used as a parting greeting “stay marine”. He clearly didn’t think that one through. It was no secret that I couldn’t wait to get out and on top of that, the MC was trying to kick me out. I was going to bust his balls over it, but I went and took a nap instead.

According to the San Jose Mercury News:

In 2010, the Marines issued Olsen an "administrative discharge." Maj. Shawn Haney, a Marines spokesman based in Quantico, Va., declined to discuss Olsen's discharge, but said his departure could have been for anything from a medical condition to a punitive measure.

So the Marines won't comment on the nature of his discharge. I'm curious, given some of these writings, did he try to get kicked out for drug usage?

Gateway Pundit also links to a news report where Oakland Police are not sure how Olsen had suffered the blow to the head that caused his skull fracture. There is the possibility that an object was thrown by one of the Occupy Oakland squatters.

This was taken moments before Olsen was struck by whatever it was. 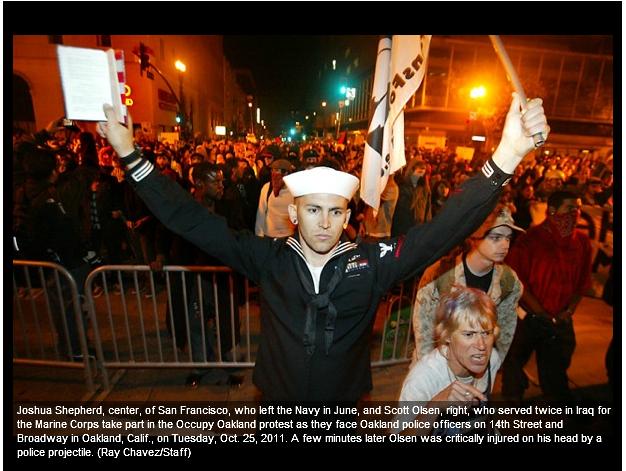 Olsen is to the left and behind the Navy guy. Now, isn't it illegal to wear military uniforms in this manner? According to the website for the Navy Inspector General, this is prohibited.

Personnel, including reserve forces, are prohibited from wearing military uniforms at political campaign or election events. Attendance at rallies, meetings and conventions as a spectator and not in uniform is allowed.

Olsen's condition has improved, and that is good news for him and his family.  Hopefully, an investigation by the police will find out what happened and what caused his injury.

What really hacks me off is how, for years, the abuse, threats, and even physical attacks on several Iraq & Afghanistan war vets, and there was zero outrage.

Remember Joshua Sparling?  He had some anti-war Leftist send him a card while he was recovering from wounds that read "I hope you die."  In 2007, he was spat at by someone in the ANSWER anti-war crowd in DC.  Was the Left outraged?  No.  In fact, the George Soro$ funded Media Mutters website questioned the claim that this amputee war vet was spat at, just like liberals have denied how they spat at returning Vietnam War vets.

Here's another war vet getting spat upon.

Kristinn at FreeRepublic wrote of this 2005 account of one vet who was spat upon and called "baby killer."

A mob of teens allegedly assaulted an Iraq War vet and his girlfriend outside a movie theater.

A wonded war vet was booed at Columbia University and called "racist," but this same alleged "institutaion of higher learning" has no problem allowing Iranian dictator and Holcaust denier Mahmood Ahamadamnutjob at their campus.

Yet Scott Olsen's injury has provoked more outrage among the Left and the media than all of these attacks of veterans listed above.

I'm sorry he was injured, and I wish him a speedy recovery.  He has a right to protest whatever he wishes.  But refusing a police order and being a part of a mob is not free speech.
Posted by MaroonedinMarin at 6:26 PM

He was injured because he subverted his oath to defend the Constitution against all enemies, foreign and domestic. He became the enemy. He is a traitor.

I love the judgmental, sanctimonious idiots on here. Try serving in the Corps, being lied to, and deployed twice to the arsehole of the earth and then tell me if all your feelings towards this organization is wine and roses. As for the uniform wearing, wrong again book nerd who never served a day in his life and doesn't know shit about military courtesy and customs. The Navy man and this marine were both OUT of the Navy and Corps respectively, thus were able to wear those uniforms at will as they are no longer bound to regs, similar to the Marine Sergeant at OWS. Do a little more research next time before u spout u're mouth chode. Better yet, join the USMC and volunteer for Infantry.

Scott served two combat tours, abroad, as a Marine - NOTHING, NOTHING AT ALL can devalue Scott's valor, honor, and patriotism from these sacrifices. Mr. Flag Waving Conservative, unless you have completed and passed the trials of blood, sweat and tears we Marines do, you have no moral, ethical, or idealological understanding of what or who we are. Your attempt to devalue Scott, to discredit OWS, is disengenuous.

right, he was hit in the front of the head by something thrown from behind him.
try again.

So Deekaman, he subverted the Constitution by exercising his rights?

First, Gunny as a fellow veteran, I know the drill. In spades. I respect your service, but I have a problem with your post-service behavior. You don't have to be all gung-ho, but if you hate the Marines, why did you stay in long enough to become a Gunny? That's what 10-12 years, depending on your MOS?

45USC771 is pretty clear about wearing of the uniform by civilians, but even in the absence of the code, it is disgraced by those who would wear it while acting in a manner directly opposed to the Constitution they swore to defend from all enemies foreign and domestic. And I'd add that unless the individual has completed the entire six year obligation (active, reserve and inactive reserve) he remains bound by the UCMJ.

So, in the end, yes I have worn the uniform, yes I know military customs and traditions and yes I know treason when I see it. I did not recant my oath to defend the Constitution and I intend to keep that oath regardless of the cost. To do otherwise is cowardly.

No one asks you to get all Hoo-rah and shit, but at least have a modicum of pride in serving.

No, he subverted his oath to defend the constitution by joining those who are the enemy of the Constitution.

And yes, it includes many Republicans.

I devalue the service and valor of no one. Those who side with #OWS devalue their own service. Those with legitimate complaints went home weeks ago.

Commenting only on the uniform wearing...He is wrong. The reason the order with information pertaining to Marine Corps uniforms is calles the Marine Corps Uniform Regulations is because everything written is directed towards the proper way to wear the uniform, not who is wearing it. The Camoflauge Utilities are unauthorized for wear outside of a working environment or during certain military related events. Not only that though...oh heck...just read Chapter 11 of MCO P1020.34G. We're talking it's against Marine Corps, Navy, and DoD Policy here. He's just wrong about wearing his uniform in that place...and so is the sailor.

"I hate the Marine Corps?" There's a difference between cracking jokes about your branch of the military and outright service hatred. Plus Olsen was a data systems analyst, so he probably got to sit in an air-conditioned office while the 03s slugged it out in Fallujah. Before anyone yells at me, let me remind you that he set up a site specifically to incite hatred regarding the Corps, even though he has little reason to hate it considering he was a POG. If GWB established a website talking shit the Texas Air National Guard, everyone would be on his ass. I may not have served YET, but Scott Olsen is a disgrace to the Marines.