The Human Hindenburg named Michael Moore was in Oakland over the weekend visiting the squatters at Occupy Oakland (CBS). Apparently, just like the rest of the America hating Left, Fat Boy found a soldier he likes in Scott Olsen. 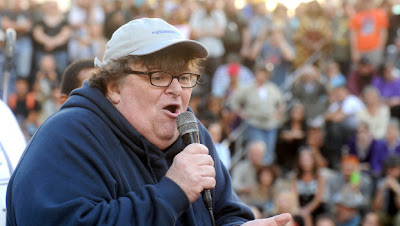 WHERE ARE THE BURGERS AND FRIES, DAMMIT!
He supposedly went to Portland, OR, to visit the mob there today (Oregon Live, via JWF).

Volunteers also say demonstrators following a Halloween-inspired zombie theme will march from Lownsdown Square to a Bank of America to protest the bank’s coal interests.

Since Moore is part of the One Percent he so despises (and is tough for him to admit), I'm sure he couldn't admit either his real reason for going to these rallies is the free food.
Posted by MaroonedinMarin at 6:31 PM