No wonder Richard Milhous Obama is embracing the squatters known as "Occupy Wall Street," because he is acting just as lawless as they are.

Despite the fact that the Senate GOP, as well as some Democrats, have defeated his jobs tax increase bill, Obama has decided to circumvent Congress and enact part of that bill by executive order (Yahoo News).

President Barack Obama unveiled a stopgap plan Monday to ease the bite of the real estate crisis for cash-strapped homeowners while attacking Congress for blocking spending to create more jobs.

"These steps aren't a substitute for the bold action we need to create jobs and grow the economy, but they will make a difference," Obama said.

Thwarted by Republican opposition to his bigger jobs and stimulus package, Obama has shifted tactics by looking for action he can take without congressional approval to provide at least modest economic relief.

"So I'm here to say to all of you... that we can't wait for an increasingly dysfunctional Congress to do its job. Where they won't act, I will," Obama said.

Regime Propaganda Minister Jay Carney is saying we should expect more of this unconstitutional behavior (Politico).

Didn't Obama take an Oath of Office to "preserve, protect and defend the Constitution of the United States of America?" They why is he in violation of it?

If this had been George W. Bush or any other Republican, Democrats would be screaming "impeachment." Instead, BDS afflicted Democrats like the Alexandria VA town drunk Jim Moron encourage this kind of behavior when it comes to pushing socialism on America.

So where is the GOP House leadership on this thwarting of Constitutional Separation of Powers?

UPDATE: Astroturfing for Obama 2012 mass e-mail says the Dicktator in Chief will violate the Constitution some more because #we can't wait. 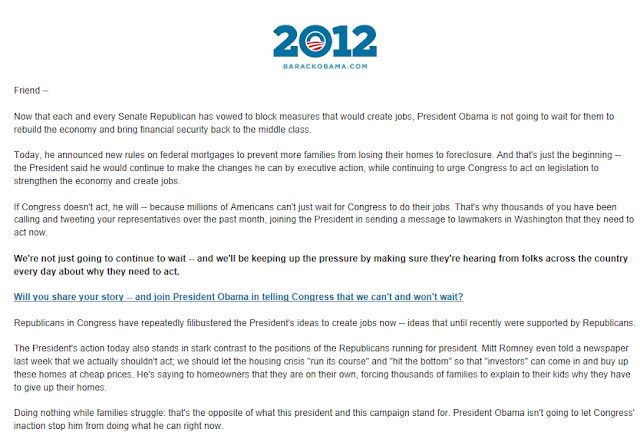 Posted by MaroonedinMarin at 6:25 PM