Why Did Obama Blow Off National Peace Officers' Memorial Service In DC Today? It Conflicted With His Golf Game

As I reported here the other day, Barack Hussein Obama was invited to speak today at the Peace Officers' Memorial Service today in Washington DC.

He turned down the invitation, while playing host to a (c)rapper who not only belongs to Obama's former "church" but also supported two cop-killers and named his daughter after one of them.

So what event was so pressing today that Obama passed up the opportunity to speak to this gathering today? 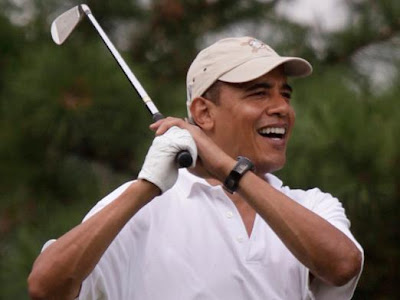 
President Obama is skipping church this morning to head to out to the golf course, playing with two of his usual mates – White House staffers Ben Finkenbinder and Marvin Nicholson – as well as guest player Ron Kirk, the U.S. Trade Negotiator.

...For those of you keeping score at home, this is also the tenth time this year the president has been out, and the 68th time he had golfed as president.

As a sidenote, President George W. Bush spoke at the Peace Offiers Memorial every year except one, when he was out of the country on official business.
Posted by MaroonedinMarin at 11:31 AM