In El Paso, TX recently, Richard Milhous Obama mocked Americans who want secure borders, claiming they "want a moat across the border with alligators in the moat."

Obama might think it's funny, but ranchers and citizens in South Texas aren't laughing, because they're living on the front lines. 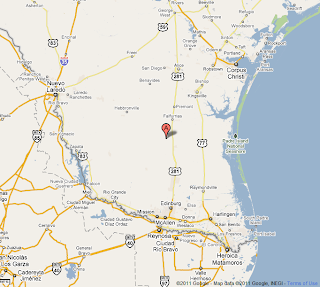 KRGV-TV from Weslaco, TX did an investigative report this week about illegal aliens who hide out on ranches in the Brooks County area of Texas, 70 miles north of the US Mexico border at Reynosa.

Ranchers blame this Border Patrol checkpoint. Illegal immigrants know if they come through, they'll get caught, so smugglers are dropping them off and leaving them to roam on ranchers' land.

Rancher Dr. Mike Vickers believes, "It's real threat to our state and our country." He feels like his land is under siege. "We call them criminal trespassers or CT's because essentially, that's what they're doing. They're trespassing on private property."

Lavoyger Durham shares his concern. "I've lived on a ranch all of my life. I know all of the horror stories," he explained. Durham says things have gotten worse. "You never know what's coming through here now. Nobody does. You know they say they're not any terrorists coming through. Who knows?"

KRGV recently reported Hezbollah was setting up shop near the border, and recruiting people.

It's not uncommon to see illegals spring across US Hwy 281 to go into brushy areas to escape capture. 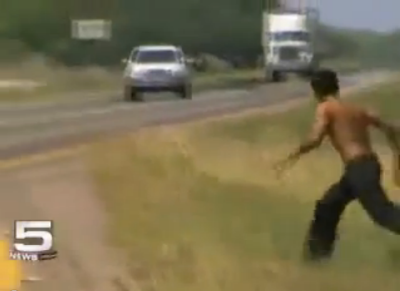 You think it's only people from Mexico coming across the border.  This South Texas rancher, Rancho Los Malulos, found these illegal aliens from India earlier this year on their ranch, being arrested by the Border Patrol.
This resident was the profile of another KRGV 5 report a couple of years ago, and the video is very interesting.

During the late 1980, early 90s, I used to see seeing illegals walk up US Hwy 77 as well, and have passenger buses pick them up on the side of the road when I was a college student, commuting from the Rio Grande Valley to Kingsville, TX.  They'd get off at the other border checkpoint in Sarita, TX, then catch a ride north of the checkpoint﻿.  People were warned not to stop off the side of Hwy 77 unless necessary, because some drivers who stopped along the side of the road were accosted by illegals hiding in the ranchland.
Some even catch railroad cars from Mexico and take them over the river.  When I was a intern at a South Texas daily newspaper in 1991, I went out one night on assignment with the US Border Patrol, and watched them stop a train at a brewing distributor at the corner of US 77 and Texas Hwy 100, just north of Brownsville.  About 30 illegals were hiding in passenger cars or other parts of the train, hoping to make it further into the US.  It's always been bad, but it has gotten much worse along the Texas border over the last few years.  The drug war and possible terrorist infiltration doesn't help matters either.
Before making other jokes about those of us who want secure borders, and threatening state governments for doing what the Feds won't do, mabye Obama and Janet Incompitano should take the cotton out of their ears and stick it in the mouths, and listen to these ranchers and other citizens who have to live in a state of insecurity on the border.
Posted by MaroonedinMarin at 8:14 AM

Because these OTM are from India, they get a permit to stay? Do we not have planes that fly to India that could take them back?