Today was the Rolling Thunder ride and rally in Washington DC, which was also the first stop on Sarah Palin's "One Nation" Bus Tour. 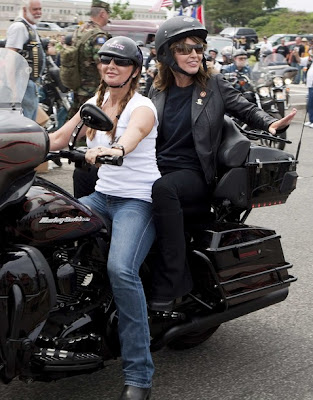 ﻿This photo above isn't mine, I found it via a link from FreeRepublic.com.  Unfortunately, I was unable to find her, or her tour bus, which was reported days ago to have been permited at Henry Bacon Dr., near the Lincoln Memorial.
Of the three plus years I've lived in the DC area, this was the first Rolling Thunder event I've attended and, well, what can I say.  You'll never see this many motorcyles and veterans gathered in one area.  Not just one parking lot...

But this one and a couple others were full at the Pentagon. 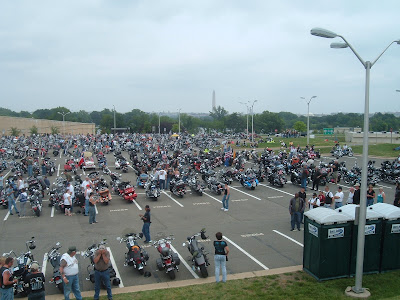 I found this reporter with a knavish, English accent (not sure who he was with) asking questions about Sarah Palin, fishing for Palin haters.  He got one from this guy, who was also saying negative things about the Tea Party. 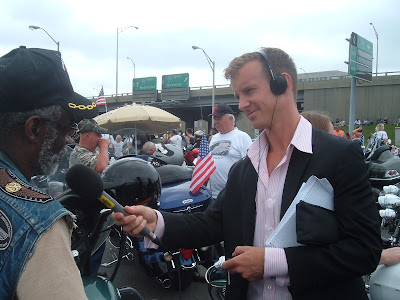 I'll let the rest of the photos and video speak for themselves. 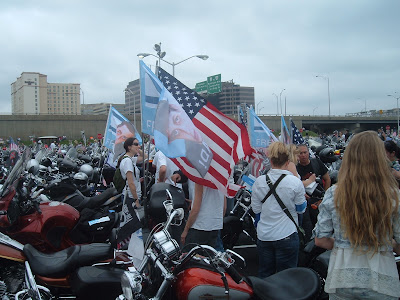 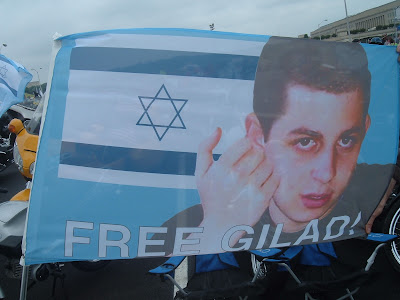 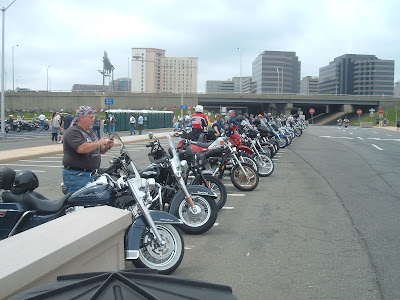 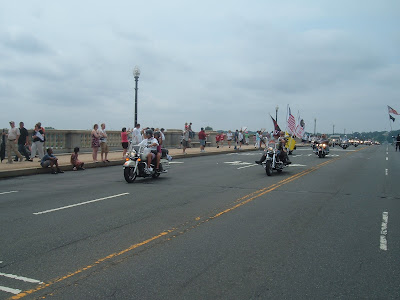 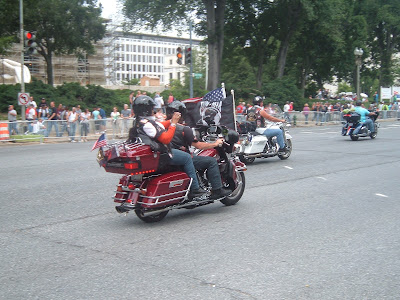 A posting on Twitter from Christine Delargy of See BS﻿ reads:

Not there but @CBSNews producer on ground tells me #RollingThunder crowd pretty anti-media, very protective of @SarahPalinUSA.

Palin is headed next to Gettysburg, and then to Philadelphia.
Posted by MaroonedinMarin at 1:29 PM

I sam a US Army vet, although I am a mountain biker, not a motorcyclist.

I wish someone could explain to me why this waste of otherwise useful oxygen gets any attention. I would like to think veterans are smarter than those who like Ms. Quitbull.

I would LIKE to, but the evidence is in.

I live in Marin County, which is why I checked the site, not because the post was about Ms Loser.

I notice on your website you don't talk about your time in the Army, just mountain biking and time as a roadie with the Sons of Champlin. I guess you just wanted to use your time in the Army to make you unimpeachable in order engage in snarky namecalling which Leftists use against Gov Palin, because they otherwise have no constructive and intelligent criticism of her, just hate speech.

It is clear now that this person is intentionally being given gratuitous coverage to try and level the field against her political opponents. People should have to earn such coverage.