After spending 11 years living in one of the most Left-wing counties in America, I had to visit the Marin IJ's website to see the reaction of these affluent hippies.

While there was a touching note left at the memorial marker for one of the heroes of United 93, Lauren Grandcolas, the majority of the piece was a collection of mindless word drool from a bunch of Leftists who not only act like they are not a part of our nation, but have no appreciation for the sacrifices of our military.

Brooklyn native Doris Spelman was more emphatic that it took too long to get the mastermind of 9/11.

"I don't know why it took so long, 10 years? Look at what we have lost, not only 9/11 but troops, young men and women," said Spelman, who lives in San Rafael. "It should have never taken 10 years — they should have gotten him right away. This isn't a Banana Republic, this is the United States of America. I'm disappointed it took so long."

Maybe it wouldn't have taken so long if you libs had not supported people who were more interested in taking down the previous administration, instead of bin Laden. Then we have this insanity from Ann Wathen of San Rafael.

"I'm having a real hard time with the hoopla and celebrations over the killing of someone, even though he is like this evil monster," she said. "I mean, how do you celebrate someone's death, even though it is something that had to happen? No one wants to see him free, but celebrating death is a difficult thing for me."

Followed by this bit of psychobabble from Mill Valley's Carrie Sherriff.


"It seems to have created an amazing relief in this country," she said. "But I don't feel joy, but a little bit of completion. I hope this can trigger relationships with the Muslims and the United States to clear up who he represented. He was just a very violent person. It's a time for healing."

So, what the Hell were we supposed to do with bin Laden, Carrie? Gestalt him to death?

Then there was the liberals who bemoaned the "cost" of the wars, like David Long of San Rafael.


"All this money and time we spent to eliminate one human being has put us partially in the financial crisis we are in now," he said. "Killing is nothing to be joyous about, but it will make a lot of people happy."

...and Robert Hill of San Rafael.

"We continue to put our children, the next generation, at risk because of all the money we are pouring into this and the war," he said. "It's a waste."

There's always a cost to war, especially one we did not ask for but came to our shores on September 11, 2001.  But freedom and our way of life is priceless.  Liberals don't understand that because they've never known the meaning of the word "sacrifice."  The most these affluent, gray-haired hippies have had to sacrifice is a drug high after dropping and breaking their bong on a concrete floor.

Keep in mind this is the same county where the traitor John Walker Lindh was raised by his permissive liberal parents.

Ignored by the IJ was a group of troop supporters who rallied yesterday in Novato, CA, in front of the Whole Foods Market in Old Town.

My friend Melanie Morgan was there and posted this picture at her website: 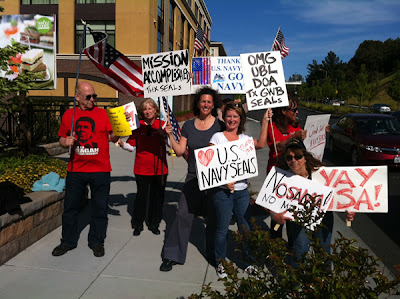 So why did the Marin IJ ignore the voices of these patriots?
Posted by MaroonedinMarin at 6:42 PM