Rae Abileah, the Code Stinko Pinko activist from the San Francisco Bay Area who was arrested for rudely interrupting Israeli Prime Minister Bibi Netanyahu today, is now claiming to have been injured (WTOP).

Abileah has been charged with unlawful conduct and disruption of Congress, both misdemeanors.

Police won't comment on the nature of her illness or why she had to be taken to the hospital.

The anti-Israel Move Over AIPAC claims Rae was "brutally attacked" by "other members of the audience—wearing badges from the conference of the American-Israel Public Affairs Committee." 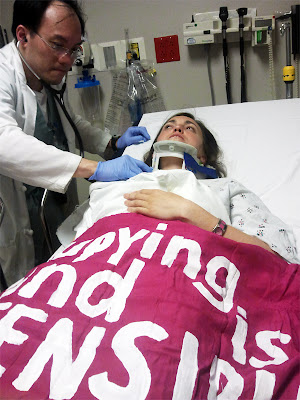 The police then dragged her out of the Gallery and took her to the George Washington University Hospital, where she was being treating for neck and shoulder injuries.

“I am in great pain, but this is nothing compared to the pain and suffering that Palestinians go through on a regular basis,” said Abileah from her hospital bed. “I have been to Gaza and the West Bank, I have seen Palestinians homes bombed and bulldozed, I have talked to mothers whose children have been killed during the invasion of Gaza, I have seen the Jewish-only roads leading to ever-expanding settlements in the West Bank. This kind of colonial occupation cannot continue. As a Jew and a U.S. citizen, I feel obligated to rise up and speak out against stop these crimes being committed in my name and with my tax dollars.”

Yeah, yeah, cry me a bleeping river!  She's about as injured as I am the lead guitarist of Aerosmith.  That photo looks about as phony as a three dollar bill.

I found this interesting article. Almost a year ago, in May 2010, Rae Abileah defended the violent Gaza Flotilla in the following Alternet piece.


This week no matter what channel you’ve turned to, you’ve likely heard about the Israeli military’s attack on the Gaza Freedom Flotilla, a collection of ships that attempted to break the siege of Gaza and distribute tons and tons of humanitarian aid (stuff usually not allowed into Gaza like cement, medicines, toys, spices, jam, chocolate, potato chips and so on). Over 700 people, including my friend and colleague Ann Wright who is a retired Army colonel and diplomat, were on those ships from nearly 50 countries, and were jailed by Israel for trying to deliver the aid. Most have been released and their stories are now coming out – you can hear Ann on Democracy Now! today. 9 humanitarian aid workers were shot and killed by the Israeli military.

There’s a lot of misinformation going around about this attack, and some valiant efforts of Israel’s PR team to cover up the truth. The world is outraged about the massacre; Israel is isolating itself in the global community, and the US continues to be one of the only allies still blinded by Israeli propaganda, though just today US officials are saying the blockade of Gaza is “untenable“.

Seems the only misinformation was coming from the anti-Semitic Left. As members of the IDF were boarding the ship, they were violently attacked by the supposedly "peaceful" activists with knives and metal batons. This unedited radio transmission shows that, as the Israeli Navy came close to the ship, the Gaza activists responded with Israeli Navy is told by one of the ships to "shut up, go back to Auschwitz" (2:05) and "don't forget 9-11" (5:42).

Still no word yet on who the Congressperson was who gave her the pass to the House gallery.
Posted by MaroonedinMarin at 4:16 PM

What surprises me most is that Google.com would actually link to your hate-filled blather, but that is how I found this article. Probably the only person besides the author to bother reading it.

Sir, you do a great disservice to the honour of the United States and your native State of Texas by publishing such lying rubbish. Left-Right politics has nothing to do with seeking basic human rights for Palestinians, not only those who are Mohammedans, but Christians, as well, who are particularly persecuted by the Israelis.

Ms. Abileah was attacked at the US Congress by a bunch of violent thugs while she was exercising her First Amendment rights in a peaceful manner. The aid flotilla to Gaza which you call "violent" was only violent because the Israelis attacked the unarmed people on the ships with live ammunition.

Israel is one of the two greatest enemies of the United States---the other being Communist China. Not content with committing over sixty years of genocide against the Palestinians, whose land they illegally and immorally occupy, the Israelis have constantly harmed the USA, from their theft of our nuclear secrets around the time of JFK, to their refusal to sign the Nuclear Non-Proliferation Treaty (unlike Iran), to their abominable and deliberate attack on the USS Liberty in 1967, to Jonathon Pollard's theft of almost all of our most sensitive security secrets---which were then sold by Israel to the USSR and the Chi-Coms---and on and on.

The USA is merely the foreign policy arm of the Israelis and an imperialistic agressor on behalf of that most belligerent people.

I could give much more evidence, like the complicity of the Mossad and the CIA in the 9/11 attacks to draw us into a war on behalf of Israel and CIA drug-running, but it's probably a waste of time.

I doubt a Zionist shill like you would bother to do the research to find out the truth of the great evils perpetrated by your handlers.

Wow! Is that tin foil wrapped a bit to tight around your forehead?

Such an astute, highly developed, intellectual response! No, really!

It's worse than I feared. Not only are you destitute of facts and logical reasoning ability. Even your ad hominem barb makes no sense!