It's a good title, in a way, to discuss the Obama Lapdog Media's (i.e. the supposedly objective "mainstream media") sycophantic coverage and protection of the Worst President in United States' History - Barack Hussein Obama.
Or, a more apropos name title would be, "A Blind Allegiance, A Blinding Hatred," to also illustrate their pathological, obsessive, psychotic obsession and hate for the former Governor of Alaska, Sarah Palin, as well as the abuse of their public trust to use their pens to take out a potential opponent for Obama in 2012.
Think I'm kidding?  Check out this page from Yahoo News today. 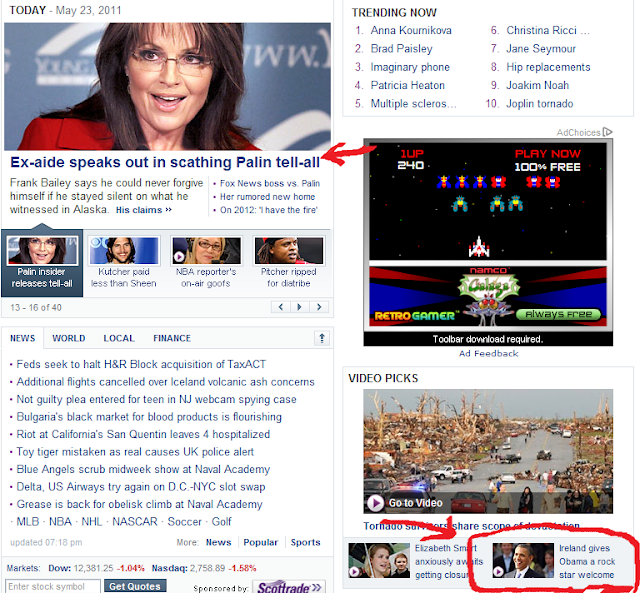 ﻿
A the top of the page, the media is practically giving this Palin hit-piece written by Frank Bailey free advertising.  Meanwhile, look at the bottom right corner.  A video news piece entitled, "Ireland Gives Obama a Rock Star Welcome."

Think the media doesn't have a shameless agenda?  Get rid of Sarah Palin at all costs, promote some wimpy RINO candidate and ensure the re-election of Obama.

To show even more proof of the lapdog media's anti-Palin agenda, Whitney Pitcher at Conservatives for Palin notes many omissions in Becky Bohrer's Associated (with Obama) Press promo on Bailey's book.  Chief among the omissions is the fact that Bailey was required to take ethics training after one frivolous ethics complaint against Gov. Palin was cleared.  Also, Bohrer left out that Bailey's co-authors are Jeanne Devon and Ken Morris who write for the anti-Palin blog Mudflats.

For all this examination of Sarah Palin, based on false accusations and innuendos, it would have been great if people like Becky Bohrer, Associated with Obama Press and the anti-Palin rag Politico would have done as much questioning and vetting of Barack Hussein Obama, instead of treating him like he is the Chicago Jesus.
Posted by MaroonedinMarin at 6:09 PM