Rush Limbaugh is talking about this, and posted this photo of the meeting between Obama and Bibi Netanyahu earlier today, with Obama being taken to school in front of the press (Bloomberg). 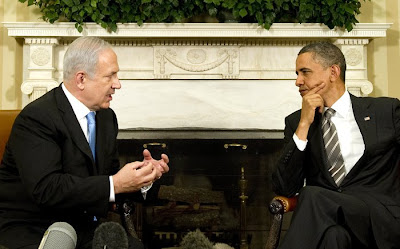 Israeli Prime Minister Benjamin Netanyahu again rejected President Barack Obama’s call to use the 1967 borders as a starting point for negotiations with the Palestinians, calling those lines “indefensible.”

“Israel can’t go back” to the 1967 borders, Netanyahu said at the White House where he met for about two hours with the U.S. president. “Peace founded on illusions will crash,” Netanyahu said.

Netanyahu reminded the Empty Suit Obama that Hamas attacked him and the United States over killing bin Laden, stating that Israel would not negotiate with a terrorist organization (Hamas).

Video courtesy of Jane at Uncoverage:

Posted by MaroonedinMarin at 11:43 AM

Behold the difference between a Statesman and a neophyte. Let all Republican Presidential candidates learn how a fully developed mature male delivers a message that his the target.