The rag known as Politico is firing their first shots in the 2012 campaign.

First, they're going to select the GOP candidate, with taking Sarah Palin out their primary objective (Legal Insurrection).

As you know, I'm not a fan of Politico's news operation. Today's feature article, Mission for anti-Palin movement: Expose her, is a prime example of how the MSM will go after Republican candidates or potential candidates.

Under the guise of reporting on the anti-Palin movement, Politico manages to dredge up almost every crank accusation against Palin. The fourth word in the first sentence of the article just happens to be "promiscuous." How nice.

In the course of the article, Politico manages to compare Palin to Charlie Sheen, Lindsay Lohan, Hitler, and Father Coughlin, but only because such people were controversial and celebrities, of course. And Politico did not make the connection itself, it merely quoted someone making the connection, that's how real reporters do it, right?

Politico even refers to Rebecca Mansour, an aide to Palin who helps with SarahPAC, as an "attack dog," with an embeded link in Mansour's name in the Politico article to the viciously anti-Palin Palingates website. This is beyond contemptible even for Politico.

Rush even opined on this the other day:

I don't know who is writing these books, but I would not be surprised if there's some kind of tie between the Obama Regime and these authors. He is a part of the corrupt Chicago machine. The secrecy, attacks on members of the press who dare to question him are right out of the playbook Richard Nixon only dreamed of using.

But opposed to Nixon, the media applauds their Chosen One, Obama. Look at the love Politico shows for the Chicago Jesus. They act like men at a sperm bank running to the bathroom. (Screenshot below from Weasel Zippers). 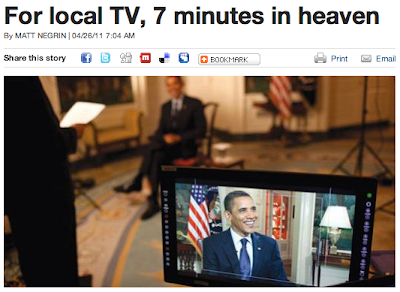 So if you're looking at Politico as objective journalism, think again. They're a part of the DNC steographer team - doing the President's bidding and making sure any real contender in 2012 is taken out early. They want a mushy, spineless GOP candidate whom they can savage easily.
Posted by MaroonedinMarin at 4:23 AM