It happened again, at a town hall in the Congressional District of Florida Rep. Allen West. The freshman congressman was heckled by white liberals.

This time, it was the ugly communist hags from Code Pinko (The Shark Tank, via Gateway Pundit).

A couple of days ago, West endured hecklers in the audience, including white liberal talk show host Nicole Sandler.

What is it with the liberals who claim to be such champions of minorities? Do they have a problem with a black conservative Congressman?

It looks as though there is a racist undertone in the attacks against West. Weasel Zippers found an untrue story from the John Podesta (another white lib) organization Think Progress (who also wanted to "saw his nads off with a plastic knife.")

In the comments section of the inaccurate story on the West town hall, Podesta's Think Progress allowed this comment. 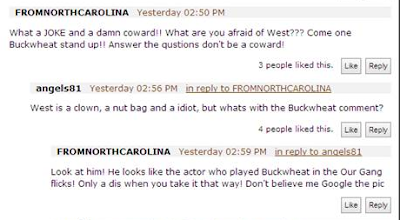 "What a JOKE and a damn coward! What are you afraid of West??? Come one (on) Buckwheat stand up!! Answer the qustions don't be a coward!

...Look at him! He looks like the actor who played Buckwheat in the Our Gang flicks!

Background on the Buckwheat slur.

Two can play at this game, Bob Schieffer at See BS!
Posted by MaroonedinMarin at 5:49 PM