I found this nugget in my e-mail box this morning, sent from Astroturfing for Obama's Jim Messina: 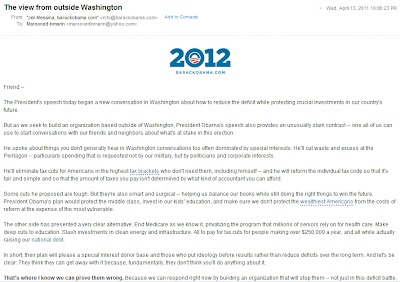 The President's speech today began a new conversation in Washington about how to reduce the deficit while protecting crucial investments in our country's future.

But as we seek to build an organization based outside of Washington, President Obama's speech also provides an unusually stark contrast -- one all of us can use to start conversations with our friends and neighbors about what's at stake in this election.

He spoke about things you don't generally hear in Washington conversations too often dominated by special interests: He'll cut waste and excess at the Pentagon -- particularly spending that is requested not by our military, but by politicians and corporate interests.

He'll eliminate tax cuts for Americans in the highest tax brackets who don't need them, including himself -- and he will reform the individual tax code so that it's fair and simple and so that the amount of taxes you pay isn't determined by what kind of accountant you can afford.

Some cuts he proposed are tough. But they're also smart and surgical -- helping us balance our books while still doing the right things to win the future. President Obama's plan would protect the middle class, invest in our kids' education, and make sure we don't protect the wealthiest Americans from the costs of reform at the expense of the most vulnerable.

The other side has presented a very clear alternative: End Medicare as we know it, privatizing the program that millions of seniors rely on for health care. Make deep cuts to education. Slash investments in clean energy and infrastructure. All to pay for tax cuts for people making over $250,000 a year, and all while actually raising our national debt.

In short, their plan will please a special interest donor base and those who put ideology before results rather than reduce deficits over the long term. And let's be clear: They think they can get away with it because, fundamentally, they don't think you'll do anything about it.

Like I said last night, all this was could be summed up as more of the same. Rich people and corporations are evil, Republicans will starve seniors, so let's cut the military and spend more to lure more deadbeats on the public teet.

Um, many of us who own our own homes aren't millionaires, and yet you want to get rid of the mortgage interest deduction. Want to talk about killing the housing market further?

And all this fearmongering against seasoned citizens, that Medicare and Socialist Security will be cut. How come under your regime, Barack Hussein Obama, that not only have seniors not had a cost of living increase in the past two years, but $500 billion was cut from Medicare to pay for your risky socialist scheme called Obamacare?

Yet what is your solution, Barack Hussein Obama? Rewarding your own contributors, as you have the last two years? More special favors and waivers for labor unions and those who've lined up to kiss your ass? More taxpayer funding for abortion on demand to Planned Parenthood? More tax money wasted on the boondoggle-to-nowhere called "green jobs" while energy prices go up and stifle any potential economic growth?

It's easy to talk about healing the partisan divide and then lash out at conservatives and others who disagree with this Regime with the most inaccurate, false, extreme, divisive and partisan rhetoric. But that's what happens when we have a nation run by a community organizer.

Reince Priebus at the RNC responded by calling Obama the Confiscator-in-Chief and says in an e-mail:

Tomorrow, he will rake in campaign cash for his re-election from three fundraising events in Chicago.

The tax hikes President Obama wants will only fuel Washington's addiction to spending rather than help curb it. More importantly, they will hurt one of the strongest engines of growth and job creation in our economy: small businesses. And they will harm middle class families by taking more money from their pockets at a time when Americans need every dime to cover their expenses.

In fact, according to the Tax Foundation, Americans will pay more in taxes in 2011 than they will spend on food, clothing and housing combined -- and it's still not enough for Barack Obama.

Posted by MaroonedinMarin at 4:03 AM