Proclaims what happened in Wisconsin "the Death of Community Organizing."

The Tea Party has been the most peaceful, law-abiding, clean-up after themselves group. You (AFL-CIO) Richard Trumpka have no right to lecture us. Go to Hell! Class warfare is unAmerican.

Introducing Sarah Palin, saying the Left hates her because of how effective she is. 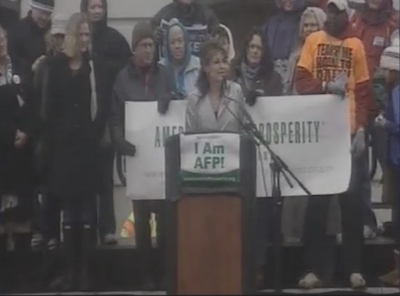 Sarah Palin, "I feel like I'm at home, this is where the line has been drawn and I am with you in solidarity."

Is slamming the phony budget cutting deal cut by John Boehner and Obama.

"That is not courage, that's capitulation."

"TO the GOP Establishment, if you stand by your pledges, we will stand with you. ....We didn't elect you just to rearragne the deck chairs on a sinking ship. What we need is you to stand up GOP and FIGHT!" Should ask Badger hockey team if teach GOP to fight like a girl."

On Obama: "The only thing that trillion dollar travesty stimulated was a debt crisis and a TEA Party."

"Win the Future? WTF is about right"

"Our president isn't leading...the only future that Barack Obama is looking to win is his reelection."

She is ON FIRE!

Link to video clip of speech at The Right Scoop, Tammy Bruce has an audio podcast here.

Posted by MaroonedinMarin at 11:32 AM