The liberal, pro-abortion hate-site Wonkette decided to "celebrate" the third birthday of Trig Palin, the down syndrome child of former Alaska Governor Sarah Palin, with this disgusting display (including a gyrating pole-dancer) on their site. 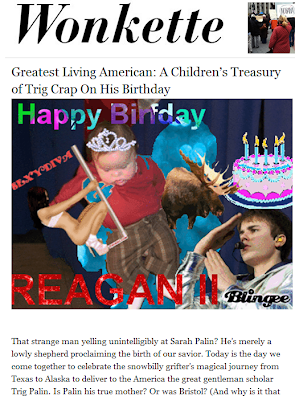 In addition to calling him "retarded," and implying Trig was the product of inbreeding, the liberal scum at Wonkette wrote the following:

“Why just celebrate tax day today, April 18th? It’s also Trig Paxson Van Palin’s 3rd birthday. His mom went to a lot of trouble to leak amniotic fluid over 8 states to make sure that he arrived in this world somewhat alive,” writes Wonkette operative “Barbara_i,” reminding us of the occasion. “Sarah went to a whole lot of trouble to name him ‘Van Palin,’ a ‘Van Halen’ reference he will never get.” Indeed.

Enjoy yourself today, Trig. Have fun! Get drunk (on purpose this time)! We can hardly wait for 15 years from now, when you will finally be able to vote and will be sent off by your mother’s junta to fight the Union in the Great Alaska War. It’ll be quite a loss. You’re the smartest one in that family.

Some businesses who advertise at Wonkette have standards, and decided to pull advertising from the site.

...Papa Johns pizza confirmed it would not advertise with Wonkette.

And Vanguard financial also confirmed it would take steps to stop advertising with the liberal blog.

Wonkette responded with tweets of its own claiming Papa Johns was engaging in “homophobia.”

Meanwhile, Wonkette Chief Editor Ken Layne defended the post in response to a query from the web site Mediaite as one attacking Palin’s supposed use of her mentally disabled son at political events. He also tweeted: “We beat up on Sarah Palin’s craven use of her son as a political prop. Child protective services should take Trig away.”

Political prop? It seems to me that the Left, including Barack Hussein Obama, have used children, in particular those with autism, etc, as political props against Republicans like Paul Ryan.

You have to be one of the lowest forms of life on Earth to attack a three year old special needs child, simply because you have an intense, insane, pathologically psychotic hatred of his mother. This has become commonplace among the so-called compassionate Left who claim to care so much about children. I've even seen this behavior firsthand from some liberal latrine slime at Gov. Palin's booksigning in 2009. But, that only shows how intellectually bankrupt the Left is in fighting Sarah Palin. They cannot defeat or make this woman go away, so they take cheap shots against her handicapped child.

I don't know about you, but I'm thinking of ordering a Papa John's pizza at lunch tomorrow.

RELATED: Michelle Lancaster lists other companies who have ads with Wonkette.
Posted by MaroonedinMarin at 5:09 PM

I've had my Papa John's and it was wonderful as always. I'll have another soon.