I'd mentioned in my write up on my business trip to Chicago last week that I saw gas well over $4 per gallon, and that taxi cabs were charging an additional $1 fuel surcharge to the regular fare.

Today, I filled up my car at this Exxon on Chain Bridge Road near the Fairfax/Vienna, VA town limits. The cost for regular unleaded was $3.99 per gallon. 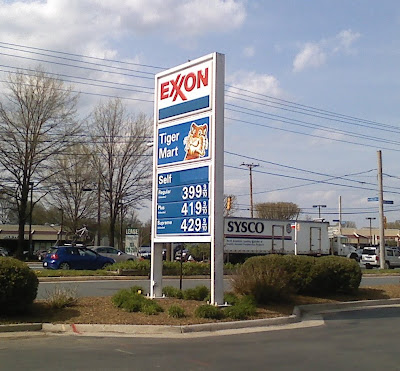 I'm hearing some people predicting there will be $5 gas by the summer, which won't surprise me. I almost wonder if we'll be seeing gas lines anytime soon, circa the Jimmy Carter gas shortage of 1979.

Gas prices and food prices are going up, and it's mentioned matter-of-factly in the news media. But do you notice that you don't hear the same tones of outrage from the same media and Democrats as you did in 2008, when gas hit $4 per gallon? Andre Harper at Hip Hop Republican noticed the deafening silence of the liberals in the lapdog media.

Of course, Barack Hussein Obama is too busy playing golf and enriching his friend and puppetmaster George Soro$, by allowing Brazil to drill for more oil while US oil jobs are lost. Meanwhile, he's gone from telling us to air our tires to trading in our gas gusslers, in order to fight the increasing price of gas.

So what's next? Is the Obama Department of Transportation going to the vaults to dust off the old "Kalaka" commercial from the Jimmy Carter era to encourage car-pooling? This PSA I saw several times on TV as a fifth grader in early 1980, wondering just what Noah's Ark had to do with car-pooling.

So just how will the media lapdogs and Obama spin this one, as high gas prices threaten to kill the economic recovery that never was?

Posted by MaroonedinMarin at 6:35 PM