Thanks to Freeper TCRLAF at FreeRepublic.com, who found this clip of Barack Hussein Obama from April 25, 2008 on YouTube.

Along with the usual demagoguery of the oil companies, pushing of so-called "green energy" and a windfall profits tax (don't forget the attacks on then-President Bush and Vice President Cheney), then Democrat candidate Obama said the following.

We'll also take steps to reduce the price of oil, and increase transparency in how prices are set, so we can ensure energy companies aren't bending the rules.

That was when the price of regular unleaded was $3.55 at this Joe's Junction gas station in Indianapolis, IN. 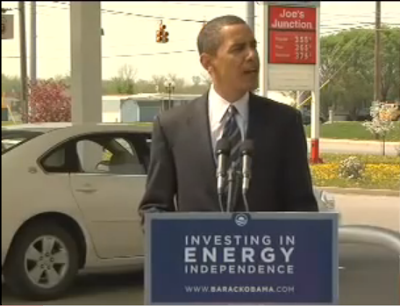 Now look at how much gas prices have gone up since Obama became President -- 67 percent.

And all Obama can do today is push the same canard that it is the fault of the oil companies. Never mind the weakening dollar, the illegal moratorium against drilling in the Gulf of Mexico, and now how his EPA has forced Shell to abandon drilling in the Arctic.

It seems Barack Hussein Obama is blaming everyone and everything for this increase in gas prices except where it belongs....with his regime.

Posted by MaroonedinMarin at 5:19 PM