Unhappy Anniversary - One Year Ago Obamacare Rammed Down Our Throats, & Tea Party Slandered As Racists In The Process

A year ago today, President Barack Hussein Obama and the Democrat Congress achieved their long sought goal of government run health care over the loud objections of the American people.

The bill, signed by the President on this day, led directly to the events that cost the Democrats the House in November, and trimmed their Senate majority.

The Heritage Foundation points out what Obamacare really means for consumers.

From personal experience and observations of others, I can say that everything the Democrats and the President said about this bill proved to be untrue. Health care premiums have gone up drastically, and our nation is swimming in even more debt.

But Obamacare was only part of the evil committed by the Democrats and their allies in the lapdog media.

Because the opposition to this bill was so loud, so intense, the opponents of the bill had to be smeared in the process. On the eve of the bill's passage, the Democrat Party and their willing accomplices in the lapdog media took part in a conspiracy of slander against opponents of Obamacare by attacking Tea Party activists in Washington DC.

On the afternoon of March 20, 2010, McClatchy Newspapers ran the following headline: 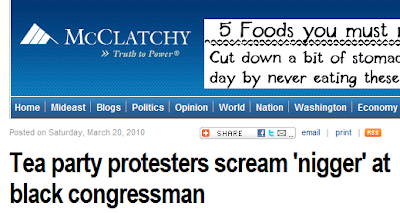 WASHINGTON — Demonstrators outside the U.S. Capitol, angry over the proposed health care bill, shouted "nigger" Saturday at U.S. Rep. John Lewis, a Georgia congressman and civil rights icon who was nearly beaten to death during an Alabama march in the 1960s.

Protesters also shouted obscenities at other members of the Congressional Black Caucus, spat on at least one black lawmaker and confronted an openly gay congressman with taunts.

Capitol Police escorted the members of Congress into the Capitol after the confrontation. At least one demonstrator was reported arrested.

There's only one problem...it wasn't true.

No one shouted the "n-word" at any of the black Congressmen. No one was arrested. The spitting allegation was, at best, an accident.
The NAACP used this lie to tar and feather the Tea Party as racist at their national convention last summer, while promoting a different rally which ended up being a Communist, union led trashing of the National Mall in October.

On that day, I shot the following 48 second video which showed no racial slurs being yelled at the Congressmen.
News reports later alleged the slurs had been yelled when they were walking to the Capitol. Earlier in the day, I had also filmed a nine-second clip, which I did not originally post to YouTube that day and sent to Andrew Breitbart in April when he took the lead in proving the allegations were false.

In addition, there are about five or more other videos shot that day of the same event, and the result was the same....no racial slur was yelled at the Congressmen. But that has not stopped the lapdog media from repeating the lie.

Compare that today with how the same media has covered up the (documented) violence, death threats, racial and gay slurs, etc by liberal union supporters around the nation during the recent bill cutting some public union rights in Wisconsin, in order to cut the state's debt.
Posted by MaroonedinMarin at 5:20 PM

Our defense against Obamacare really comes on the state level with "nullification". I'm reading Thomas Woods' book on the subject and he makes some excellent points, one of which is the absurdity of SCOTUS (a branch of the Federal Government) ruling on the Constitutionality of Federal Laws like Obamacare. The conflict of interest is clear. Consequently, the decision on Constitutionality should be made at the state level, not the Federal.

Having been in Madison during the worst of the demonstrations, I can assure you that you are absolutely correct regarding the double standard the media holds in reporting TEA Party activities vs. Union protests.