Thirty years ago, the nation was stunned when a lone nut gunman tried to assassinate President Ronald Reagan in Washington DC.

If you watched ABC News, you saw anchor Frank Reynolds give this coverage, and get frustrated as well at conflicting reports being given, including one saying that Press Secretary Jim Brady had been killed.

I'll never forget, as a sixth grader in South Texas, getting the word of the attempted assassination attempt as we were outside in PE class. I'd followed closely Reagan's 1980 campaign, which is how I first became interested in politics. The shock of hearing he was shot, and not knowing much else, was compounded by a few idiots who had been Jimmy Carter supporters applauding when the teacher told us the news.

Apparently, the idiocy I saw was not an isolated incident, as NewsBusters dug into the archives.

As a reminder that leftists have been poisoning the wells of civility and basic human decency for a very, very long time, I present these two items from the Associated Press and United Press International on April 1 and 2, 1981, respectively: 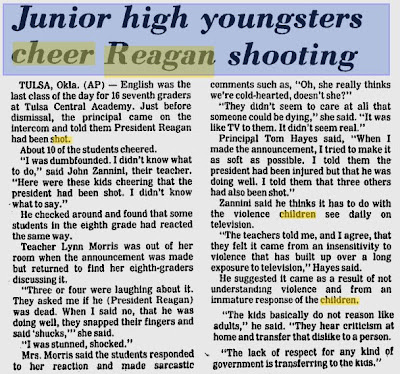 Look at who these educators were trying to blame, namely "an insensitivity to violence that has built up over a long exposure to television." Puh-leeze. I can see how that might conceivably transfer to indifference about people being killed, but that doesn't explain why someone would be happy about it. Someone --parents, teachers, possibly others -- taught these children that Ronald Reagan getting shot would be something to cheer about. I suspect that those who were quoted were distracting from a situation they had caused.

Those who weren't around at the time or who were apathetic won't recall that Reagan was intensely despised by the media, the intelligentsia, and the educational establishment. All of them waged a non-stop campaign during the 1980 election season to convince people that electing Ronald Reagan president would be the equivalent of signing a nuclear holocaust death warrant -- and that if he didn't do that, he'd starve them to death by cutting government spending. I remember because, sad to say, I was sufficiently persuaded by the first argument to feel compelled to vote for John Anderson that November.

That early teens would find these lines of non-reasoning especially persuasive shouldn't surprise anyone.

Of course, it's these same laughing boys on the Left who lecture the rest of us about civility and try to make connections to supposed "right-wing violence" that don't exist, or they call conservative female politicians sexist names, as a certain dick who has a show on HBO did recently.

Posted by MaroonedinMarin at 6:14 PM

Actually, you have to go back to Nixon. Kennedy got us into Vietnam, Johnson escalated it, but Nixon was the one excoriated for it. Reagan was just a "stupid old man". But he was dangerous...and stupid. And a "doddering old man".....WITH HIS FINGER ON THE BUTTON!

Then it was open season. Ann Richards keynote at the 1988 DNC was an horrific display of incivility for its time. Then they went after Quayle (he's stupid), Gingrich (he's stupid and dangerous) and GW Bush (stupid, but an evil genius...oh, and he talks funny).