Remember when Joe Bite Me said the following in October 2008?

"Mark my words," the Democratic vice presidential nominee warned at the second of his two Seattle fundraisers Sunday. "It will not be six months before the world tests Barack Obama like they did John Kennedy. The world is looking. We're about to elect a brilliant 47-year-old senator president of the United States of America. Remember I said it standing here if you don't remember anything else I said. Watch, we're gonna have an international crisis, a generated crisis, to test the mettle of this guy."

OK, to be fair, it's been over six months ago this was said. There's been a lot of international crises you can point to this statement and say "What?"

But seriously. One of our allies, Japan, has suffered a devastating earthquake and fears over radiation from a nuclear reactor meltdown. The Middle East is in turmoil. A lot of words are being said about Libya, but no real leadership. As Chip Reid of See BS confronted the new White House press flak yesterday, "Isn't it time to make a decision?"

All these international crisises going on, and what is Obama busy doing? 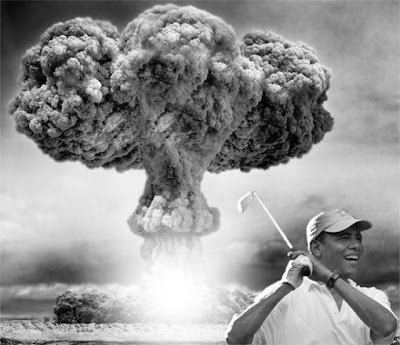 And preparing to take another taxpayer funded trip to Rio to get his ego-stroked.

Not to mention rising gas prices and the propaganda we're getting on a daily basis about the supposed economic "recovery."

Well you were wrong, Joe! This is a big f**king deal! Being President is more than just taking trips on the public dime and appearing on ESPN to talk sports as if you're an American Idol star. The world has been watching Obama, and see his mettle.

In the eyes of the world, he certainly doesn't pass the leadership test, and there's no curve to grade by.

Related: Sister Toldjah - "My President Wants To Party All The Time...."
Posted by MaroonedinMarin at 5:57 PM