Obama Hits Lowest Disapproval Numbers For 2011, So He's Jetting Off To Rio

It's already the third month into 2011 and Barack Hussein Obama has matched his lowest disapproval numbers for the year, according to Rassmussen Reports. 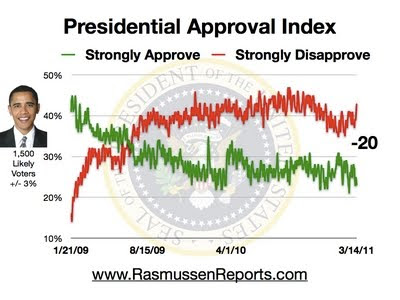 So with gas prices rising, as well as the debt, in addition to other world events, you'd think he'd buckle down and get to work, right?

Wrong! It's time for him and Michelle to jet down to Rio, on our dime (Forbes, via Weasel Zippers).

President Barack Obama will take his first official trip to Brazil this weekend where he will speak in the popular Cinelandia Square in downtown Rio de Janeiro.

Access, of course, will be tightly restricted and security measures so secretive that not even the Embassy or US Consulate in Rio know exactly who it’s all going to go down.

Access to the square will begin at 11:30, and is sure to draw a crowd.

Obama is popular in Brazil.

One politician seeking office in Rio actually changed his name to Barack Obama in 2008 to solicit votes. He didn’t win. The Obama family will also take in the sights in Rio.

A trip to Corcovado mountain, where the Christ the Redeemer statue stands (France gave us Lady Liberty, gave Brazil Jesus) is supposedly on the itinerary.

This is the extent of Obama's narcissism. He could care less about what is going on in America and our interests around the world. His poll numbers are sinking like the Titanic, so he needs another fix for his ego of large, adoring crowds.

No need to worry about all that cost for security, operating expenses to fly down there, especially when the American taxpayer is picking up the tab.

I think deficit reduction should begin by taking Air Force One away from the Obama family.
Posted by MaroonedinMarin at 7:21 PM