NPR's Low Blow Against Michelle Malkin: Make Jokes About Her Family While Her Cousin Is Missing

If you're a reader at her website (or seen the links here or at Twitter), you know that Michelle Malkin and her family are asking for help in finding her cousin, Marizela, who disappeared in the Seattle, Washington area at the beginning of the month. (Here's the link to the website dedicated to the search, in case anyone who reads this might have information)

But the supposedly compassionate liberals at NPR showed just how heartless they are to Michelle during this family nightmare.

Broadcasting from their government-funded sewer, NPR broadcast a comedy game show Wait, Wait....Don't Tell Me the other day. During a segment of the show, they claimed Michelle said Obama is a "secret Muslim" (she never has said that) and used that fallacy to joke that she found out that her grandfather was a closeted Muslim.

It's one thing when you want to portray all conservatives as ignorant, the Tea Party as RAAAAACIST, while claiming Jews own all the newspapers. It's another to attack the family of a prominent conservative while they're living through a nightmare no family should have to endure.

For a bit of irony on this supposed "comedy" NPR ought to take a lesson from a show they broadcast in June 2006. 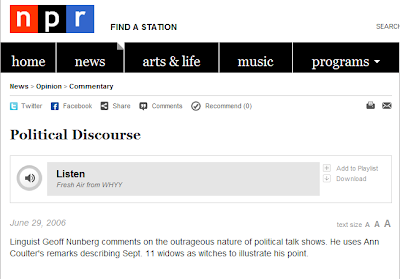 In other words: Civil Discourse for them, but not for us.

One more reason NPR should be defunded.

Posted by MaroonedinMarin at 3:56 AM

I have not heard npr but have heard michelle malkin many times and she seems mad and harsh all the time! plus, she says really awful things about other women, and goes on rants. I do not enjoy hearing her and usually only listen a minute or two before channel surfing. I am not surprised she collects comments as she really dishes it.