Yesterday, NPR CEO Vivian Schiller defended the network against proposed cuts in federal funding, as well as the liberal bias they have long been accused of.

"NPR's audience is not a left- and right-coast phenomenon," she said. "We are urban and rural, North and South, red state and blue state. Our listeners are equally distributed throughout every part of America."

What a difference a day makes!

Today, filmmaker James O'Keefe has once again lodged a bombshell story, as two men posing as members of a Muslim Brotherhood linked organization met with NPR executives to propose a donation to the network.

What transpired from this meeting was telling about NPR's liberal bias.

Ron Schiller, who was until last week NPR's Senior VP for Fundraising, is on tape calling Tea Party members "racist" and "xenophobic," as well as implying that conservatives are "uneducated." 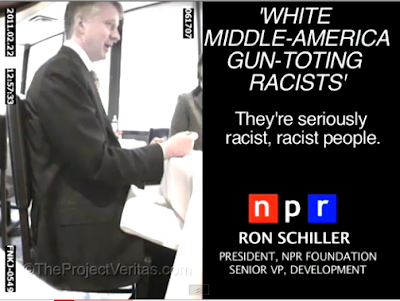 He even defends Juan Williams firing last October by NPR,... 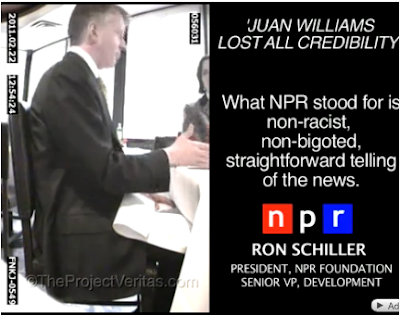 and implies anti-Semitic stereotypes of Jews owning media that presents a favorable view of Israel. 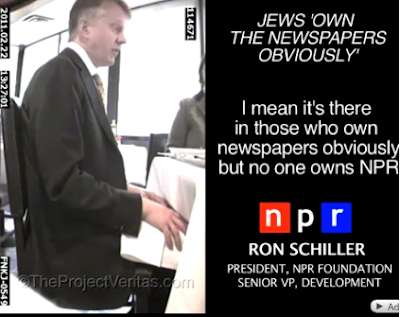 The video...watch it for yourself:

What is funny, is that in MSNBC's report of the video, O'Keefe's exposes are referred to as "undercover stunts." Compare that to how the liberal media covered the person who fraudulently pretended to be David Koch and called Wisconsin Gov. Scott Walker.

In the video, Mr. Schiller also implied that NPR could survive without federal funds, which I'm sure will not be a problem, especially after the release of this video.

..the most damning sections are those in which Ron Schiller is shown nodding approvingly as actors Ibrahim Kasaam and Amir Malik roll off a litany of anti-Semitic statements. And not only does Schiller remain nonplussed, he laughs at NPR's designation as "National Palestinian Radio," and vigorously defends NPR as untainted by "Zionist" influence.

It's fair to say there will be more to this story in the days to come.
Posted by MaroonedinMarin at 5:23 PM

Dismayed at her resignatio¬n and the big deal made over remarks made by Ron Schiller, NPR's vice president for developmen¬t; he is entitled to say what he wants to say when not at work and ironically he works for Public Radio partially supported by public funds in a democracy where we are guaranteed the right to free speech. Both Schiller' should have rolled with the punches. The Tea Partyists are tightly linked to the Koch Brother and John Birch Society. Ron Schiller's hyperbole was closer to the truth than not.