A little over one month after calling him a "monkey in the window," the liberal AlterNet website launched a new racist attack on Herman Cain as a sellout to blacks and "apologist for white racism." 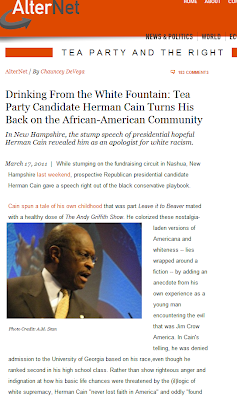 Near the end of his piece, author Chaunce DeVega also attacks not only Clarence Thomas, but also Juan Williams.

Some have asked why I call black conservatives such as Herman Cain the "garbage pail kids" of American politics. It is not because they lack political vision. Nor is it a suggestion that black conservatives belong on the refuse pile of American history. I use this phrase because black conservatives have embraced a party that (especially given its current love of know-nothing politics) is hostile to a community to which they should have some nominal sense of attachment and commitment. With their ideology rejected by the African-American community, black conservatives are now quislings who seek solace in the arms of those who may hold people of color in low regard, but reward them for their novelty--and loyalty.

This critique of Herman Cain is not "just" about race or long-running political differences in the black community. No, this conversation is also about the reality that black conservatives are the spearhead and smokescreen for a range of policies that are hostile to the interests of the working- and middle-classes, and which support the dismantlement of the social safety net in this country.

Consider the following rogues' gallery and their relationship to the contemporary Tea Party GOP. Justice Clarence Thomas plays the role of an ethically embattled black
golem who sleeps through hearings and only offers comment in support of the most draconian and right-wing positions. Juan Williams plays the role of a teeth-baring attack dog that slams NPR for "racism" and "elitism," thus legitimating the right's efforts to defund any media outlets that offer a voice contrary to Fox News. Michael Steele plays the "anti-Obama" -- a buffoon who promised to bring the "fried chicken" and "potato salad" in order to win the black vote. And Herman Cain plays the race minstrel, a projection of white fantasies and a magic salve that tells conservatives racism is gone, and any attacks against the Tea Party GOP that dare to suggest otherwise are dirty pool.

Ultimately, for any candidate running under the Tea Party brand, expressing reverence for the "Founding Fathers" and a cartoonish version of the U.S. Constitution is mandatory -- and, in this, Herman Cain, speaking in New Hampshire, did not disappoint. In a manner typical of "original intent" constitutional fetishists, Cain dodged any criticism which points out the obvious fact that the Founding Fathers were slave-holding hypocrites, and the Constitution itself was a pro-slavery document. But, then again, in Herman Cain's world, race-segregated drinking fountains did no harm; it's all about the water. In the very white world of the Tea Party, that reassurance is, no doubt, most welcome.

Apparently, thinking as an individual means selling out, in Chauncey DeVega's mind.
Posted by MaroonedinMarin at 5:03 PM