Along with Michael Moore, Barack Hussein Obama, and the Democrat Party, look who supports the whining union thugs in Wisconsin: 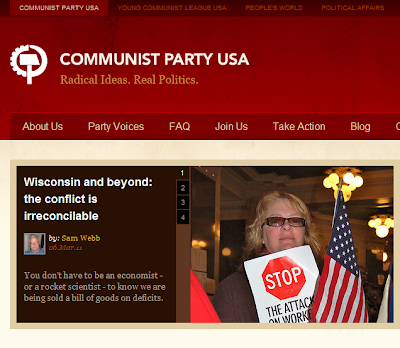 and the Socialist Party USA 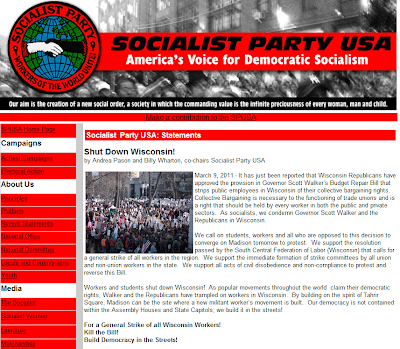 Carl Webb in the CPUSA writes:

In a recent column in the New York Times, economist Paul Krugman writes, "It's amazing how this whole crisis has been fiscalized; deficits, which are overwhelmingly the result of the crisis, have been retroactively deemed its cause. And at the same time, influential people around the world have seized on the idea of expansionary austerity, becoming ever more adamant about it as the alleged historical evidence has collapsed."

He continues: "And where there is skewed vision, the economy perishes."

In other words, we are being sold a bill of goods by the Republican Party propaganda/attack machine (and some Democrats too) that will bring nothing good to the American people.

The co-chairs of the Socialist Party, Andrea Pason and Billy Wharton, wrote "Shut Down Wisconsin"

Workers and students shut down Wisconsin! As popular movements throughout the world claim their democratic rights, Walker and the Republicans have trampled on workers in Wisconsin. By building on the spirit of Tahrir Square, Madison can be the site where a new militant worker’s movement is built. Our democracy is not contained within the Assembly Houses and State Capitols; we build it in the streets!

This is who we're up against.

H/T - Kimberly Morin via Twitter.
Posted by MaroonedinMarin at 12:40 PM

They think they see their opening. What they are staring at is the dustbin of history.

Fill your outlines in with three examples of each for Thursday.