Hope has been restored to the members of a Lilburn mosque that wants to expand.

The U.S. Department of Justice has decided to investigate the City of Lilburn's decision not to grant permission for rezoning to the Dar-e Abbas Shia Islamic Center. The rezoning is necessary for expansion.

"There is no good reason for the City Council's non-approval vote. No public service is being served by not allowing the mosque to expand," said Doug Dillard, an Atlanta attorney representing the mosque. "What is to be gained by the City Council by ruling against a group that has been in the community for the past 12 years?"

Early reports stated that the mosque wanted to build a gymnasium and other additions.

Dillard denies this. "The mosque is looking to expand and needs a larger parking lot and main building," he told 11Alive News.

The Department of Justice declined to comment, citing the ongoing investigation.

The Department of Justice has four options, according to Dillard.

A ruling from the Department of Justice is expected soon.

So, why is our "Justice" Department intervening in a case on behalf of a religious institution? Isn't there something called "separation of Church and State" or does that just apply to Christianity?

From what I've seen, opponents of the mosque have received threats, but apparently that's not something that Eric Holder is interested in investigating.

Creeping Sharia has this photo at their site as well. 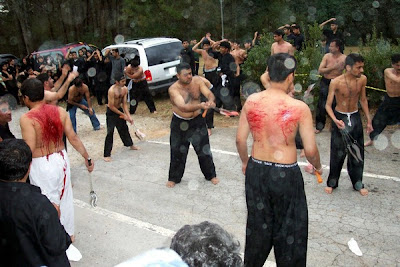 Appparenlty, this is how the men of Lilburn entertain themselves.
Posted by MaroonedinMarin at 4:32 AM