In addition to calling him a terrorist-friendly attorney general, is it OK to now call Eric Holder a racist after yesterday? Because he sure sounds like one (Politico). 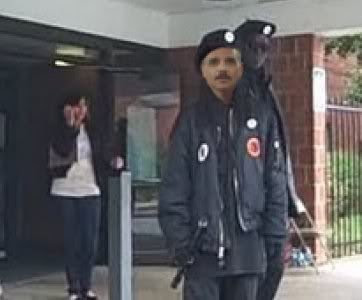 Attorney General Eric Holder finally got fed up Tuesday with claims that the Justice Department went easy in a voting rights case against members of the New Black Panther Party because they are African American.

Holder's frustration over the criticism became evident during a House Appropriations subcommittee hearing as Rep. John Culberson (R-Texas) accused the Justice Department of failing to cooperate with a Civil Rights Commission investigation into the handling of the 2008 incident in which Black Panthers in intimidating outfits and wielding a club stood outside a polling place in Philadelphia.

The Attorney General seemed to take personal offense at a comment Culberson read in which former Democratic activist Bartle Bull called the incident the most serious act of voter intimidation he had witnessed in his career.

"Think about that," Holder said. "When you compare what people endured in the South in the 60s to try to get the right to vote for African Americans, and to compare what people were subjected to there to what happened in Philadelphia—which was inappropriate, certainly that…to describe it in those terms I think does a great disservice to people who put their lives on the line, who risked all, for my people," said Holder, who is black.

And if you think that such a statement is not racist, let me take you back to July 1992.

Talking about the nation's economic problems, Mr. Perot said: "Financially, at least, it's going to be a long, hot summer. I don't have to tell you who gets hurt first when this sort of thing happens, do I? You, your people do. Your people do. I know that and you know that."

One man called out objecting to the phrase. He called out again later when Mr. Perot said it was "your people" who suffer most from runaway crime.

Willie Clark, president of the N.A.A.C.P. branch in San Bernadino, Calif., said the overall tone of Mr. Perot's remarks and particularly his use of the phrase "your people" reflected how culturally out of touch he was with his audience.

"When he said 'you people' or 'your people,' it was like waving a red flag in front of a bull," he said. "It's something white folks have used when they don't want to call you nigger, but they don't want to treat you like an equal."

So I guess Eric Holder is up there now with King Shamir Shabazz of the New Black Panthers, calling the rest of us "crackers."

Excuse me, Mister Holder, but you're supposed to represent ALL of the American people, not just "my people." Did you ever hear of something called the 14th Amendment? It says something in there about "equal protection under the law.
Posted by MaroonedinMarin at 3:49 AM