In the post with the FreedomWorks videos, I mentioned that Ann Althouse and her husband, who blogged from the Wisconsin State Capitol during the union temper tantrum, were threatened yesterday from some left-wing nut who obviously watched Pulp Fiction one too many times.

Well, the person has apparently been found. Gateway Pundit links to Robert S. McCain and The Underground Conservative, who found this photo below of the alleged writer of the threat and his girlfriend. 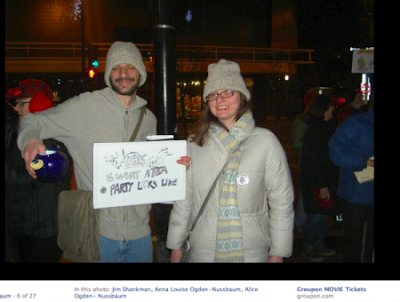 This is wannabe thug Jim Shankman and his girlfriend Anna Louise Ogden Nussbaum:

You can write your own caption for this picture. Or, to borrow my friend Fred’s game at RDW: Caption this!

McCain found the following about Ogden-Nussbaum:

Ogden-Nussaum’s leftist leanings can be seen in a December 2002 story in the Madison Capital Times about more than 500 local residents who signed a “Not in Our Name” ad against the Iraq war. Here is a January 2003 press release from “Not in Our Name” Madison. In case you didn’t know, “Not in Our Name” is an anti-war front group established by Clark Kissinger, ex-SDS national leader and member of the Revolutionary Communist Party, a Maoist sect.

More info: Shankman and Ogden-Nussbaum are evidently co-proprietors of a Web site called “Free University of the General Strike.” The concept of the “general strike” (and the allied concept of “direct action”) are associated with anarcho-syndicalism, the chief U.S. proponents of which were the IWW.

So it seems that what we’ve got here is a couple of 21st-century Wobblies.

As well as being arrested during a Critical Mass ride opposing the 2004 Republican National Convention (I'm familiar with the antics of those nutcakes from living in the Bay Area).

Underground Conservative also found out more about the hippie commune this guy and his girl live at.

If they did write the threat against Alhouse and Meade, I'm wondering if Vice President Joe Bite Me will personally call them and offer his support for their work in using their muscle to keep the (in his words) "barbarians from the gate."

RELATED: John Notle at Big Government has a look at 20-Days of Left Wing Thuggery In Wisconsin, When Will Obama, Democrats and MSM Call For Civility?

Posted by MaroonedinMarin at 3:56 AM