This is the weather forecast since noon today through tomorrow morning for the area where I grew up, the Lower Rio Grande Valley of Texas. 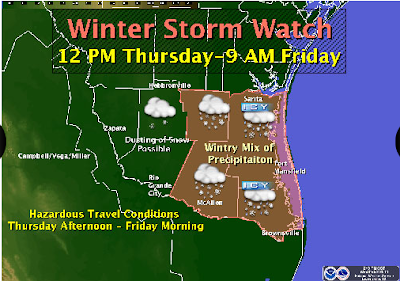 To give you an idea of how out of the ordinary this is, I cannot recall ever missing a day of school for a "snow day." The only day I remember getting out of school was as a third grader in September 1977, when we were let out of school as Hurricane Anita threatened our area (it missed, but we got a nice day off). It's not unusual to celebrate Christmas in the Valley by the pool on an 80 degree day.

However, Algore, the 21st century equivalent of the 19th century travelling medicine show snake-oil salesman, took advantage of this cool spell to remind us this is proof positive that the man-made fraud known as "glo-BULL warming" is real and causing this.

Really? Well if that's the case, why has South Texas had other freezes before? (Valley Morning Star).

Although freezing weather forecast for the Rio Grande Valley isn’t expected to be as bad as freezes in 1983 and 1989, the potential for economic damage is great, longtime observers said Wednesday.

Ray Prewett, of Texas Citrus Mutual in Mission, the Rio Grande Valley growers’ organization, wasn’t concerned about major damage earlier this week. However, he said Wednesday that weather reports are more alarming than he previously thought.
“I’m certainly more concerned now than I was yesterday,” he said of predictions of a hard freeze.

“(Hidalgo County citrus grower) John Shary said he never experienced a freeze during his years here from 1920 to the 1940s,” Prewett said.

The two freezes of the 1980s were decimating to the industry, Prewett said.

Nice try Al, but what a lot of us in the United States could really use right now is a hot day at the beach. 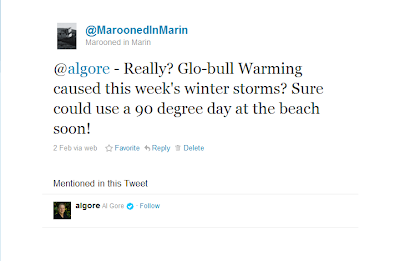 With all the hot air coming out of Algore's mouth, it's a surprise we're not having 100 degree days.
Posted by MaroonedinMarin at 6:14 PM

Remember, "Weather is not Climate"...unless they say it is.