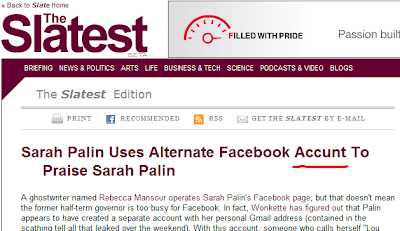 Two commenters at Slatest criticized Slate for the slur with one writing, “I’ve let go of my reflexive typo pointing in the Slatest, but Facebook accunt? on a Sarah Palin’s tidbit, come on guys, at least get a basic spellcheck function.”

Given Slate’s prominence as a respected part of the mainstream media with professional standards to uphold, an innocent typo of this magnitude with this subject is highly unlikely.(For the benefit of Media Matters senior blogger Eric Boehlert, try to imagine Slate “accidentally” doing the same to Michelle Obama or Nancy Pelosi. It wouldn’t happen.)

During the 2008 presidential campaign, liberal activists paraded in public wearing t-shirts emblazoned in large lettering, “Sarah Palin is a c***” with the c-word fully spelled out. 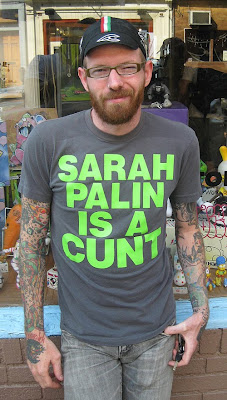 The Slate article itself does not bear a timestamp, but the comments begin at 5:18 p.m., meaning the article with the offensive headline has been up for nearly four hours as of this writing.

The screenshot of the article I posted above was taken about 7:15 a.m. EDT, so this headline has been up now for FOURTEEN (14) hours.

Washington ComPost, you have some 'splainin' to do!


And to dismiss this is just a simple misspelling is to ignore the fact similar slurs have happened to conservative women/minorities before. 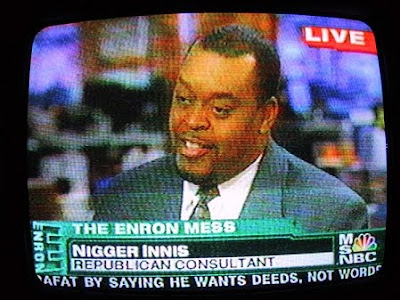 His name is Niger Innis.
Posted by MaroonedinMarin at 4:16 AM