Thousands of Tea Party activists and other citizens came out to counter-protest the spoiled brat teachers and other public service union employees in Wisconsin. Here's a couple of images I found. The one at the bottom is a still shot from a LiveFeed camera. 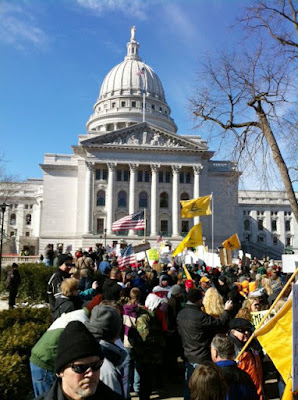 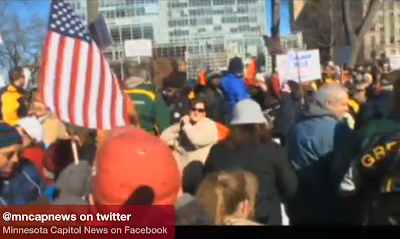 NRO has a video interview with Andrew Breitbart

“What you have is the president of the United States organizing anarchists, public-sector unions in order to intimidate Americans,” he says.

Michelle Malkin has more examples of liberal "civility" at this link.

UPDATES: Deekaman attended and commented below:

We are back. Safe and warm. We had no altercations even though we were around them nearly all day. OTOH, the signs they carried were what they accused us of carrying. Hateful.

Ann Althouse was there as well and has many photos and videos at her blog. She also got video of one of the doctors handing out "sick" notes for schoolteachers. 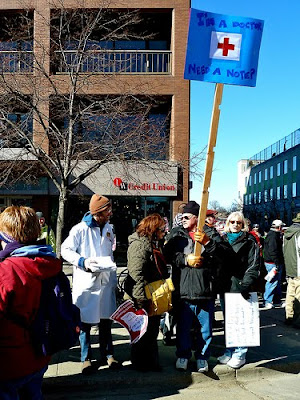 Jim Hoft of Gateway Pundit was there and says about 15,000 people showed up...and that's with 24 hours notice!
Posted by MaroonedinMarin at 1:27 PM

Email ThisBlogThis!Share to TwitterShare to FacebookShare to Pinterest
Labels: wisconsin

We are back. Safe and warm. We had no altercations even though we were around them nearly all day. OTOH, the signs they carried were what they accused us of carrying. Hateful.

I did not get photos (except 1 - 'Zo Rachel from PJTV was in the crowd. I happened to notice him and got a shot of him with my wife). I was not well-prepared for pictures.

I'm about to post on my own blog. Feel free to steal, link or whatever.

It's tough to estimate thee crowd on our side, but it was substantial for the short notice.