The vote was taken just a few minutes ago and the Democrats goosestepped to defend that unconstitutional bill known as Obamacare, rejecting repeal by party line vote of 51 to 47.
That includes all the phony Democrats who sounded like moderates, like West Virginia Senator Joe Manchin.
Remember this ad in the 2010 mid-term elections?
Manchin lied! Vote his ass out in 2012!
And dont forget our own Senator, James "Mellonhead" Webb, one of Obama's jokers in Virginia who tried to pass himself off a Reagan Democrat right after the Democrat bloodbath in the 2010 midterms. 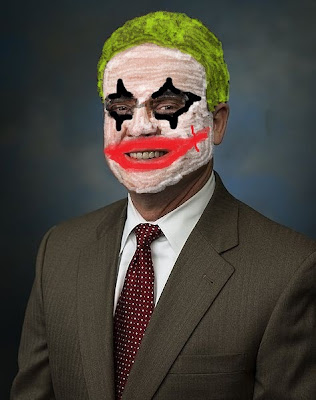 Webb is anything but a Reagan Democrat. Read The Reagan Diaries and you find out what The Gipper really thought of Webb.
By the way, here's my Tweet to the Twitterless Senator.

You're no moderate, nor a Reagan Democrat, Jim Webb! To my fellow residents of the Commonwealth of Virginia, lets vote Jim Webb's ass out in 2012 as well!
Posted by MaroonedinMarin at 4:05 PM

I can't say that this was in any way,shape,or form a surprise. Webb has made it clear from the start of his term that he was nothing more than a follow the party bosses politician. He has constantly betrayed Virginia best interest and is a disgrace to the state.

In another two years the residents of Virginia will be given the chance to show him the door. Let us hope they will do so.

I don't think he is going to run again. He has done no fundraising; NONE. I think once Allen announced he realizes that it is going to be very tough. The dems don't particulary like him much, as he has voted with republicans. Not on the really big issues, but on some. Also, I don't think his op ed about getting rid of affirmative action won him many friends in the party. He is a weird animal, he doesn't fit in either box. Not even the rino box.