In our new era of civility liberals called for after the tragic shooting, Rebel Pundit, (h/t This Ain't Hell) found the following post on Craigslist. 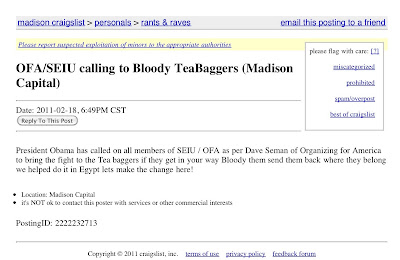 OFA, of course, refers to Barack Hussein Obama's astroturf organization "Astroturfing for Obama" (otherwise known as Organizing for America), who has promoted the union protests against the budget cutting proposals by Republican Governor Scott Walker.

SEIU is the Obama supporting union whose members in St. Louis assaulted a black man, Kenneth Gladney, at a Tea Party and also called him a nigger.

They must be covering their tracks, because as I'm writing this, the comment has been flagged for removal.

Now imagine if this comment had been attributed to the Tea Party, and the media reaction that would follow.
Posted by MaroonedinMarin at 8:11 AM

Fighting back - none violent but creative, one of their own tactics ... starting Tuesday in Sacramento: