MoveOn Member To Black Tea Partier "You're On Koch's Plantation"

Jim Hoft at Gateway Pundit was covering the dueling protests between the union supporting MoveOn.org liberals and the patriots of the St. Louis Tea Party when he got the following video of black Tea Party member Stephanie Rubach:

Rubach was told by one of the MorOns that she was "on Koch's Plantation," referring to the Koch Brothers.

Jim also got a photo of this "classy" sign. 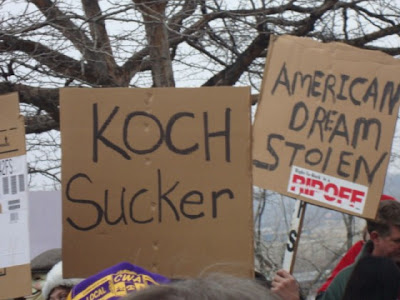 Speaking of classless, Gabriel Malor (h/t Sister Toldjah) who blogs at Ace of Spades, took this photo at a pro-union protest in DC Today. 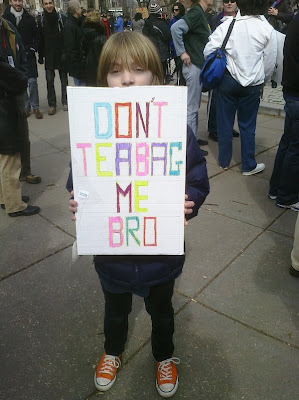 I'm sure all this extremism and bigotry above, as well as the beating of conservative women, anti Semitic remarks, and anti-gay slurs, will lead tomorrow's Sunday shows.

Posted by MaroonedinMarin at 2:32 PM