On Tuesday, Massachusetts Democrat Mike Capuno said the following to union members at a rally:

"Every once in a while you gotta get out in the streets and get a little bloody when necessary."

Since he's uttered those words, a conservative female activist in Washington DC was assaulted by a union thug, another conservative was called a "bad Jew." Another union brute told a cameraman he'd "f**k you in the ass you faggot." Today, a black Tea Party member was told she was on the "Koch Plantation."

Now, in Sacramento, CA, a Tea Party member was assaulted and injured by another union thug.

Chuck DeVore writes about the attack at Big Government.

I spoke to Stanhope, as he drove to the hospital for x-rays and treatment for the injuries sustained at the rally, and asked him what happened. Mr. Stanhope said that he was with a group of about 150 Tea Party activists across the street from the
MoveOn.org-organized union rally. A union man with a bullhorn, Richard Andazola, 28, was yelling across the street at the Tea Party activists, calling them “fascists.”

Then one of the Tea Party activists, also bullhorn equipped, replied, “We pay your salary!” 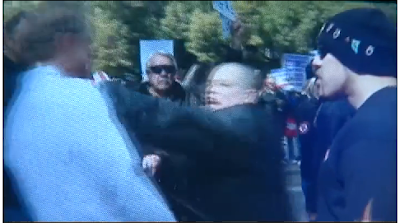 Somehow in the melee, Stanhope’s hand was also injured

We will be posting more footage and further coverage once it becomes available.

Stay tuned for an in-depth write up from an eyewitness on the scene.

But you won't find any mention of this on your cable news network.
Posted by MaroonedinMarin at 8:13 PM