What appears to have been a Mexican military truck with about a dozen men on board entered the Anzalduas International Bridge near Mission, TX, on the Texas and Mexico border (KRGV - TV 5, h/t The Blogmocracy). 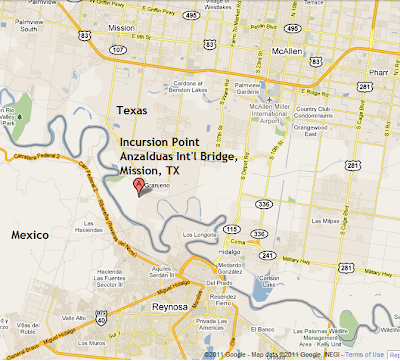 CHANNEL 5 NEWS is exposing what appears to be a Mexican military incursion into the United States. It was all caught on camera. We froze surveillance video taken at the Anzalduas International Bridge. 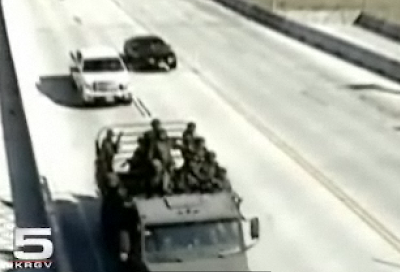 We counted at least a dozen armed men in the back of the truck. The vehicle travels down the bridge toward the U.S. Customs checkpoint. Its driver makes a U-turn just before reaching the lines of cars there. It then starts back south toward Mexico. The men pull over and search a vehicle for a few minutes then resume their trek south. The presumed soldiers then cross back over the boundary toward Mexico.

They are in U.S. territory for about 10 minutes. We're taking a closer look at the vehicle they stopped on the bridge and what U.S. authorities have to say about this apparent incursion.

Go to the link and watch the video, which I'm unable to embed.

This isn't the first time the Mexican military has been suspected of entering South Texas. Last year, Mexican Marine helicopters were photographed flying around Starr County, TX which is the county bordering the west of the Mission/McAllen area. 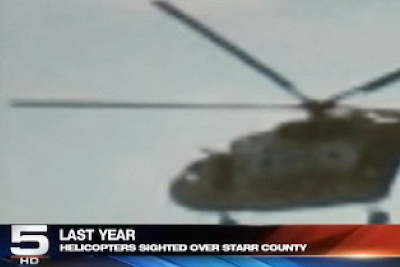 Channel 5 reported on this in March of last year.

Having many family and friends who live in the area, they've told me of these sightings as well.

No word yet from the State Department, or Homeland Security, Mexico is denying this was their military who crossed into the US.

Posted by MaroonedinMarin at 4:58 PM