Another example of liberal racism (Vindy.com; h/t GayPatriot from Twitter).

The Facebook discussion started between Hagan and Maggi Cook, of Southwest Ohio, regarding Wisconsin Senate Democrats not showing up at their Statehouse because of their governor’s attempts to remove collective bargaining rights and cut benefits for public workers.

Rachel Mullen Manias, a GOP activist from Broadview Heights, outside Cleveland; a man named Kevin Crowther and others joined the discussion.

The discussion continues, with Manias, Cook and Crowther, who is black, arguing for the need for cuts and Hagan against what’s been proposed.

Manias then wrote, “I’m guessing your (sic) from an entrenched area ripe with corruption. I don’t recognize your name as a Cuyahoga County resident, but I’m guessing you’re from the land of Traficant...”

Hagan responds that she’s not making sense. Two others comment and then Crowther returns to the discussion of public unions.

Then Hagan writes, “I ran against Traficant buckwheat ... so take your personal shots, and shove them where the sun don’t shine.”

Hagan said “buckwheat” is a term he’s been using since he was a kid and that it carries no racial connotation for him.

He said he wasn’t aware of the race of any of the people involved in the discussion and that his comment was directed at Manias, not Crowther.

Manias, who e-mailed the discussion to The Vindicator, believes the word is inappropriate in any case.

“I find it completely unacceptable that a career politician finds the word ‘Buckwheat’ to be socially acceptable and appropriate in any situation,” Manias said in an e-mail. “If my children used that racially offensive term towards anyone, I’d wash their mouths out with soap.”

Crowther of Liberty Township in Southwest Ohio, believes the term was directed at him.

“I was offended by that,” Crowther said.

...Hagan said it’s an attempt to make him look bad.

He said that Republicans, as the ones who are cutting programs for the poor and rights for public employees, should be the ones defending themselves.

So look whose calling names, it's the liberal Democrat Hagan. He's not just interested in making racial slurs, he also has to use sexual slurs to describe Tea Party members.
Let me educate Mr. Hagan on the racial connotation of the "Buckwheat" slur. It came from the "Little Rascals/Our Gang" character, which, like Hollywood did a lot back in that time, depicted blacks as easily frightened, usually with their eyes bulging out. 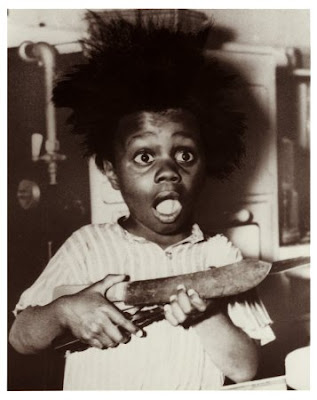 Dan Rather used the term in 2001, in describing his bosses at See BS, but since he was a liberal, he was not punished for it.
Posted by MaroonedinMarin at 10:39 AM