While clicking back to a link from The Lonely Conservative, I found she had posted another example of Left-wing bigotry--this time, it's a outright racist attack towards black conservative Hermain Cain on AlterNet.com. 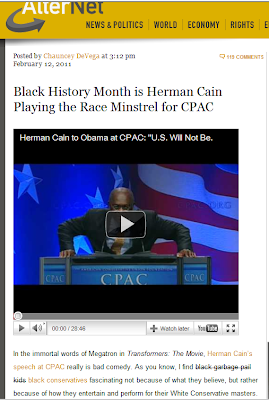 In the immortal words of Megatron in Transformers: The Movie, Herman Cain’s speech at CPAC really is bad comedy. As you know, I find black garbage pail kids black conservatives fascinating not because of what they believe, but rather because of how they entertain and perform for their White Conservative masters.

When race minstrelsy was America’s most popular form of mass entertainment, black actors would often have to pretend to be white men, who then in turn would put on the cork to play the role of the “black” coon, Sambo, or Jumping Jim Crow. Adding insult to injury, in a truly perverse and twisted example of the power of American white supremacy black vaudevillians would often pretend to be white in order to denigrate black people for the pleasures of the white gaze.

Herman Cain–an ironic name if ever, and one more suited to a tragic figure in a Harlem Renaissance era novella–is not “blackening twice” as some race minstrels chose to do.

The writer ends with the following.... 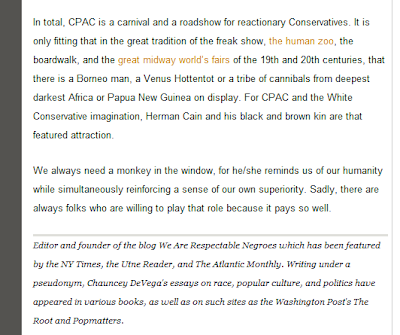 We always need a monkey in the window, for he/she reminds us of our humanity while simultaneously reinforcing a sense of our own superiority. Sadly, there are always folks who are willing to play that role because it pays so well.

Now can you imagine the endless outrage if any conservative had referred to Barack Hussein Obama or any member of the Congressional Black Caucus as a "monkey in a window?" Liberals would be all over the news outlets pointing just how allegedly "racist" conservatives are.

Which reminds me, here's the most recent comment on one of the videos I shot at CPAC of Ann Coulter's speech, which is an example of the "new tone" liberals lectured us about after the Tucson Tragedy. 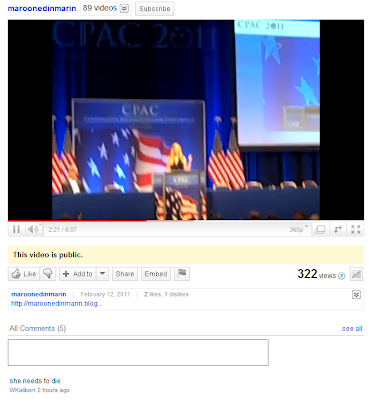 Posted by MaroonedinMarin at 5:25 PM