"I Had To Work All Week But I'm Here Now" -- A Sign From Yesterday's Rally In Wisconsin Says It All...

The difference between regular, tax-paying Americans and the union bosses whom Obama and the Democrats side with (FreeRepublic.com). 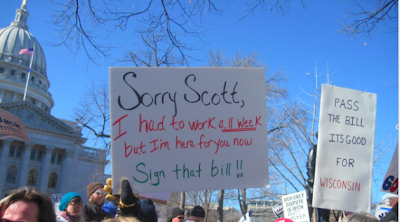 These people didn't get paid or get time off to protest, unlike the union workers and other Leftists.

I've heard people mention this fact as well: these people are going to be paying for the child care because the schools are closed due to the teacher's unions little temper tantrum. You want to talk about pissing the citizens of the state off against the teacher's unions?

Posted by MaroonedinMarin at 6:52 AM

we are winning the PR war in in Wisconsin. Even with everything stacked against us; the media, the unions, all of it. We will prevail. Because we are right.