Facts are stubborn things, if you're a liberal union supporter out telling the world about how supposedly evil the Koch Brothers are.
OpenSecrets.com has a list of the top campaign donors from 1989-2010. Here's their top 20 for the 2010 campaign cycle (h/t Kim Hedum, via Twitter). 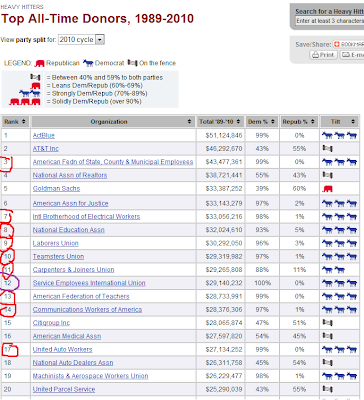 If so look closely, most of the top 20 campaign donors for the 2010 campaign season were gasp....labor unions supporting Democrats--SEIU, NEA, AFT, the CWA thugs, et al.

As for the Koch Brothers, who are now the favorite bogeymen of the Democrats and their Leftist allies?

Posted by MaroonedinMarin at 8:06 PM

Most people are clueless about why Wisconsin is a big deal for the unions.

Unions are required by law to publicly disclose (electronically even) every single donation and dues, and how they are spent. Since Citizens United, the outcome of which the Koch Brothers had an unequivocally strong influence (Thomas and Alito had conflicts of interest being directly affiliated with their organizations), corporations - and unions - were allowed unlimited amounts of contributions toward advertising for campaigns, without disclosing any of the sources or sums (indirectly, sort of). HOWEVER, unions are continuing to disclose every campaign contribution over $200.

Thus the Koch brothers, according to the Center for Responsible Politics, could have millions of dollars undisclosed. Not to mention the Koch brothers run numerous other "citizens" groups propped by their funds. So they spread their fortunes through various dummy, astroturf, often not-for-profit political groups with a very clear goal that unites them.

Not everything is the way it appears, especially with campaign finance post-Citizens'. So don't make easy claims to issues that are much more complex.

Under Sarbanes-Oxley it would be very difficult to hide that kind of money.

And The Center for Responsible Politics is not exactly non-partisan. And since the same can be said of Open Secrets, it is unlikely they would overlook that kind of money. They WOULD find it.