Don Surber writes that the State of West Virginia is considering honoring the former night rider, as well as King of Pork, the late Sen. Robert "Sheets" Byrd. 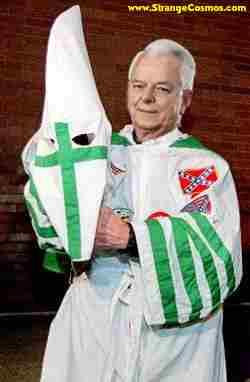 From the Charleston Daily Mail today: “Lawmakers are disagreeing over whether a new statewide holiday named for Robert Byrd is the best way to honor the legendary senator. House Bill 2865, introduced Wednesday, would officially designate Byrd’s birthday, Nov. 20, as the state’s 13th recognized holiday. Delegate David Walker, D-Clay, introduced the bill as a way to formally recognize the senator and the legacy he left.”

Try my pre-action from my February 18, 2010, column in the Charleston Daily Mail: “W.Va. needs a Sen. Robert C. Byrd holiday. A day of spending would be fitting”:

MONDAY was not Presidents Day. The federal holiday on Monday was George Washington’s Birthday.

In 1968, Congress voted and chose Washington over the presidents.

His original birthday was Feb. 11 but it was moved to Feb. 22 when Britain adopted the Gregorian calendar.

Abe Lincoln was born on Feb. 12 and his birthday stayed there. But it is no longer a state holiday, legislators having traded it for the day after Thanksgiving, aka Black Friday, as a state employee holiday.

Republicans succeeded in having the post-Thanksgiving state holiday named “Lincoln Day,” which honors the man most responsible for our statehood.

The name has not caught on.

I say we rename it Robert C. Byrd Day. His birthday is Nov. 20. Close enough for
government work.

Like Washington, Byrd’s birthday moved, in his case due to poor record-keeping. His name, Cornelius Calvin Sale Jr., also changed, as his Aunt Vlurma and Uncle Titus Byrd raised him after his mother died.

He’s 92. He’ll get a kick out of a holiday. Who knows, maybe the state can get an earmark out of the deal.

I am no fan of his, but my fellow West Virginians are. Majority rules.

Put me in charge of the state and you never change your socks and the little streams of alcohol will come trickling down the rocks.

If they do, just don't try to cannonize the former Senator, as was done at his funeral last year.
Posted by MaroonedinMarin at 7:06 AM