J. Eric Fuller, an unhinged Leftist who was shot at the Tucson town hall last week, did more than rant lies to the socialist Democracy Now! TV show about Sarah Palin, Glenn Beck and others being responsible for last Saturday's tragedy.

Today, he was arrested for making a death threat to Tucson Tea Party leader Trent Humphries (who has received many death threats this past week), as well as disorderly conduct (KGUN).

ABC News Anchor Christiane Amanpour hosted a remarkable gathering of victims, heroes, witnesses and first responders. It was the first time most of them had been together since Jared Lee Loughner opened fire in a Safeway parking lot, killing 6, and wounding or injuring 14 others -- a rampage that happened one week earlier almost to the hour.

...The theme of the event was "An American Conversation Continued" -- the idea being to continue the conversation that a madman's brutal rampage had interrupted. So it was inevitable that the conversation would eventually turn to politics. It did, toward the end, with Amanpour leading a discussion on a very touchy but obvious topic: gun control.

That's where the atmosphere turned tense. When Tea Party representative Trent Humphries rose to suggest that any conversation about gun control be put off until after the funerals for all the victims, witnesses say Fuller became agitated. Two told KGUN9 News that Fuller finally rose, took a picture of Humphries, and said, "You're dead."

When State Rep. Terri Proud (R-Tucson) rose to explain and clarify current and proposed gun legislation in the state, several people groaned or booed her. One of those booing, according to several witnesses, was Fuller. Witnesses sitting near Fuller told KGUN9 News that Fuller was making them feel very uncomfortable.

The event wrapped up a short time later. Deputies then escorted Fuller from the room. As he was being led off, Fuller shouted loudly. Several witnesses said that what they thought they heard him shout was, "You're all whores!"

Deputies have now charged Fuller with one count of threats and intimidation, and said they plan to charge him with at least one count of disorderly conduct. Humphries told KGUN9 News that he does plan to press those charges.

ABC is uncertain whether to show this segment when Moonbat Fuller made the treat. Just helping the Left, if they do.

Fuller is an unhinged Leftist with an agenda, check out these Facebook posts. 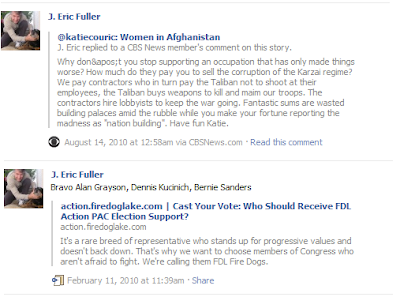 ....who said in the above comment to SeeBS' Katie Couric on this story about Afghanistan women, referring to our military and contractors there.

Why don't you stop supporting an occupation that has only made things worse? How much do they pay you to sell the corruption of the Karzai regime? We pay contractors who in turn pay the Taliban not to shoot at their employees, the Taliban buys weapons to kill and maim our troops. The contractors hire lobbyists to keep the war going. Fantastic sums are wasted building palaces amid the rubble while you make your fortune reporting the madness as "nation building". Have fun Katie.

To further show how nuts the guy is, he tried to visit the parents of the shooter, pothead 9/11 troofer Jared Loughner to forgive him.

But he wants to peddle lies that the Tea Party, Palin, et al were behind the shooting?

Legal Insurrection: Being A Crime Victim Is Not A License To Make Up Facts
Posted by MaroonedinMarin at 4:06 PM