Obama's Speech Fails, Cowardice All Around

One of the best analyses of Barack Obama's speech at the Together We Thrive pep rally came from...(gasp)...a liberal (Daily Beast - Kirsten Powers).

President Obama’s speech in Arizona was a huge missed opportunity.

True, as always, he delivered as “Healer-in-Chief” and provided inspiration. This was
Job 1 for the speech.

But there was another job: shutting down the nonsense about how Sarah Palin or right-wing talkers caused the shooting. This matters not only because it’s important to tell the truth, but also because it would set the stage to move on to really examining the true causes of this nightmare massacre.

Obama mostly chose to be vague on this point, “For the truth is that none of us can know exactly what triggered this vicious attack. None of us can know with any certainty what might have stopped those shots from being fired, or what thoughts lurked in the inner recesses of a violent man’s mind.”

He did add to his prepared remarks that incivility did not cause this tragedy, but he stopped short of a full rebuke of the complete irresponsibility of those who have been stoking anger at conservatives who—as far as we know—had nothing to do with this.

When the president did lay blame, it was on Americans in general. Among the many odd assertions he made: suggesting that “what a tragedy like this requires” is that “we align our values with our actions.” We were told to “expand our moral imaginations.”

The speech was cowardly, as was the glowing review of too many Conservative pundits (such as Charles Krauthammer) who were too afraid of looking "divisive."

If Obama did try to lecture the Left, do you think they got the message? Hell no!

In the San Fransicko Bay Area, where liberals preach love and tolerance while simultaneously spewing hate and intolerance towards conservatives and Christians, they didn't get the memo from their Messiah in the White House.

A rally in Oakland became a Palin/Beck bash fest, under the guise of a "non-partisan" rally and one speaker, Roy Wilson, who works for an institution named after slain civil rights leader Martin Luther King Jr.

And hateful anti-Sarah Palin posters popped up on the other side of the Bay Area with violent rhetoric. 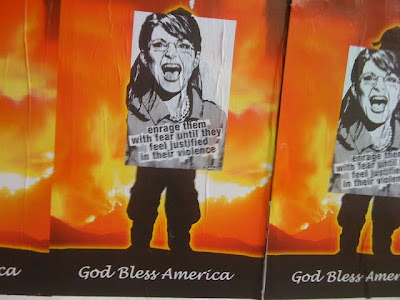 The lapdog media, as I mentioned earlier, didn't get the memo either, as they continued the attacks on Palin and the right.

Could Obama have called out the haters on the Left? Yes he could have. He's never been afraid of calling people out before, as in the case of the Cambridge, MA police.
The Supreme Court
Fox News
But not the Daily Kos (whom he has written for and attended their conventions) or members of his party. He couldn't rebuke Pima County Sheriff Rosco P. Dupnik, but instead called to "thank" him and shook his hand on Wednesday.

Simple explanation. He was too afraid to call his base out on their hate because he's pissed them off enough. Extending the Bush tax cuts, refusing to close Gitmo and just end the War on Terror.
For all his talk of "one America" in 2004, Obama doesn't understand that he's president of all America. His concept of "one America" is simple, we're not supposed to question him, just shut up and get in line with the rest of the drones.

Now that the media lapdogs are moving on doesn't mean we should forget. Never forget the "slanderous libel" heaped on Sarah Palin, talk radio, the Tea Party and veterans this week after this tragic shooting.

Never forget how Obama, his lapdog media and other liberals were telling us not to "rush to judgement" after the jihad at Ft Hood, and rushed to judge conservatives after Tucson.

Never forget the Left's own hateful ideology they passed off as "patriotic dissent."

They'll try it again, when the situation arises. And, God forbid, any attempt at violence on any conservative or Tea Party member happen, the Left and their lies this last week should be held responsible.
Posted by MaroonedinMarin at 9:34 AM