Another American has been killed due to the violence in Mexico, this time, a 59 year old missionary (KGBT- Valley Central).

Authorities are investigating the death of an American woman who was allegedly shot near San Fernando and came across the Pharr International Bridge seeking help. 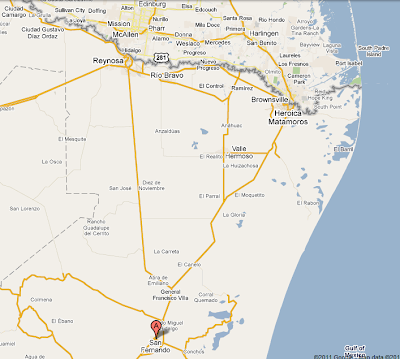 Villescas told Action 4 News that a woman later identified as Davis was rushed to the McAllen Mediical Center where she passed away.

Davis' husband told investigators that they were traveling on a Mexican highway outside San Fernando when they were confronted by a group of armed men.

He told police that he sped off and that the gunmen opened fire wounding his wife in the head.

The man said he sped back to the United States where he asked for help at the bridge.

Pharr police said both Davis and her husband were missionaries and traveled extensively in Mexico.

The widow of a man who was killed while jet skiing at nearby Falcon Lake also spoke about this tragedy.

Tiffany Hartley knows exactly what the Davis family is going through.

“There is anger and frustration,” said Hartley. “I think there is every emotion possible that you can feel.”

Back in September 2010, Hartley’s husband David was allegedly killed by cartel members after the couple crossed on jet skis onto the Mexican side of Falcon Lake.

She said her daily life has not gotten easier and moving on is hard to do.

Hartley said when she heard about Nancy David her thoughts immediately went to David and the day he was taken from her.

“I literally broke down,” said Hartley.” I had every emotion. I was sad, angry, and devastated. My heart was breaking for them.” 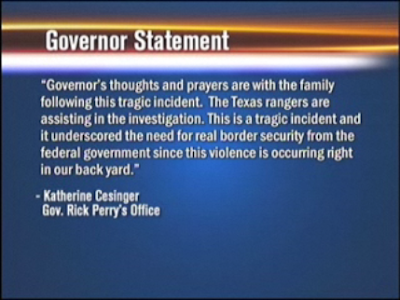 "This is a tragic incident and it underscored the need for real border security from the federal government since this violence is occurring right in our back yard."

This story from the UK Daily Mail says the couple may have been targeted for their pick-up truck they were driving.

There's nothing silence from the Obama Regime and Hillary Rotten Clinton's State Department on the killing of another American in Mexico. Yet Obama mentioned his support of the DREAM Act amnesty for people who've broken our immigration laws.

This is ridiculous! I grew up in this area and still have several friends and family members living in South Texas. When we moved down there in the mid-1970s, you could go to the border towns (Reynosa, Matamoros, Progreso) to eat, drink, buy liquor and shop and not even think twice about your safety. Since the rise of the drug cartels, starting in the mid 1980s, it's gotten worse now to the point that people I know won't even go across the border anymore. Since this Administration is not willing to secure the border and confront Mexico on this violence, it's going to get worse.

Posted by MaroonedinMarin at 7:36 AM