Another day, another misleading Lapdog Media headline, making it sound like 25 conservatives were arrested (Yahoo News). 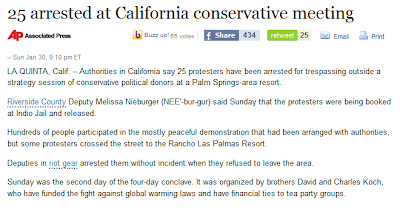 LA QUINTA, Calif. – Authorities in California say 25 protesters have been arrested for trespassing outside a strategy session of conservative political donors at a Palm Springs-area resort.

Riverside County Deputy Melissa Nieburger (NEE'-bur-gur) said Sunday that the protesters were being booked at Indio Jail and released.

Hundreds of people participated in the mostly peaceful demonstration that had been arranged with authorities, but some protesters crossed the street to the Rancho Las Palmas Resort.

Deputies in riot gear arrested them without incident when they refused to leave the area.

Sunday was the second day of the four-day conclave. It was organized by brothers David and Charles Koch, who have funded the fight against global warming laws and have financial ties to tea party groups.

These were liberal groups, like Greenpeace, who were arrested (Gateway Pundit).

Big Government also reveals that the protest was organized by by former Obama ACORN adviser Peter Dreier. In a message sent out with an Occidental College e-mail account, he also encouraged the protesters to attend a forum with UC Irvine Law Dean Erwin Chemerinsky, U.C. Berekely Professor and former Obama adviser Robert Reich, and (911 Troofer & Marxist) Van Jones.
Posted by MaroonedinMarin at 5:01 AM